I know there was incredible anticipation and questioning about how the Lauryn Hill show would turn out here in St.L at the Pageant, but as a good friend put it, "She can show up and be kind of horrible, and it would still sound and be great!"

Well, she definitely did more than just show up.

I got an email a few weeks back that pushed the door opening time back from 7 to 9.  That actually reassured me that she was going to come and that it wouldn't be too late like in some previous concerts.  There was still no official start time on the tickets, but I was feeling good.

The DJ that was on when we entered the Pageant was good.  Played a mix of mostly old-school jams that got the crowd hyped up.  Almost didn't seem like he was on the stage for the whole two hours that he was up there.  Close to 11 (the time the doorman said the show would start around), a second DJ came on stage (onto the actual stage) and started to hype the crowd up even more.  He played for another 52 minutes.  Around minute 40, the band came on.  Bassist even started playing along with the DJ - sounding super cool as he thrashed his locks around to the beat.

About the band, they kind of looked like they had been found by Ms Lauryn on Craigslist yesterday morning.  There was just no cohesive look about them.  One of the bassists kept trying to take pictures of the crowd with his cell phone.  One of the keyboardists looked like he would rather be about 100 different places than on the stage.  When the DJ said that Lauryn would be out soon after the crowd started chanting her name, two of the back up singers gave a look that basically looked like "We'll see if you still want her when she comes out."

Well. At 11:52, she came out and told everyone that she was going to "do old music new ways."  And with that the show started.

Set list:
"Forever Loving Jah" by Bob Marley
"Lost Ones"
"When it Hurts So Bad"
"Ex-Factor"
"Final Hour"
"How Many Mics"
"I Only Have Eyes for YOu"
"Fu-Gee-La"
"Killing Me Softly"

And two encore songs:
"Turn Your Lights Down Low"
"Doo Wop (That Thing)"

She changed a lot of the songs up, but I thought it was musically amazing.  She had the live band (Which played better than I expected - way better, though the level of their sound was really high and sometimes distorted.)

The way she played most of the songs was more upbeat and more rocked out.  Kind of a funk-rock fusion of some kind.  It was mesmerizing.  It was still possible to sing along to favorites once you caught on to the new beat and sound.

I'm sure that some fans were disgusted because they are so attached to the old songs (those songs have such strong meaning to me as well as so many other people).  I saw some people leaving and not coming back... not sure if it was their disdain for the music or the fact that it was getting late and they may have had to work on this MLK day.

I feel like a lot of the songs have a really strong meaning to Hill, as well, and that makes it hard to play them the same way she played them years ago without starting to (possibly) feel as vulnerable as she did when she first made them.

The new sound was amazing.  She even did "Ex-Factor" two different ways.  Really, really fast and rocked out, and then more slow and mellow.  Kind of weird, but it was ok.

She seemed really, really sincere and passionate.  She many times thanked the crowd for coming out and supporting her for all this time.

One thing that made the show even better was the genuine looks of enjoyment from her and the band at several points.  It was almost like they were shocked that things were going so well.  The bassist took his phone out a few more times to snap pictures of the crowd.  And the back up singers and one of the keyboardists looked like they were truly amazed by the show and sometimes amazed by Lauryn's singing and rapping and interactions with the crowd.  I even heard later that night that she had stuck around out back in her vehicle saying hey and greeting people.  Very much seemed like the Lauryn Hill that I believed was the most beautiful person on the planet back in her heyday. 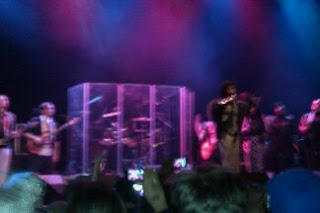 She danced a-la James Brown at times, she sang in her trademark raspy voice (now a bit raspier with age), she rapped with such speed and fluidity that I was in awe.  And.  It.  Was.  Awesome.

Several times she got on the band (in jest?) to let them know that they need to "move the crowd."  She even told them once that they needed to not "waste this tune."

I cannot express the vibe of the crowd jumping in unison with the each other and the band during "Fu-Gee-La" as soon as the familiar beat and tones came out to let us know that was the next song.

So glad I got the tickets.  So glad to share that experience with friends, and strangers, and the band, and Lauryn.

Only complaint would be that she didn't take off the crazy shrug-thing that she had to keep annoyingly adjusting the whole night (like, every 20 seconds throughout the night).

I am pretty sure this may be the last time she goes on tour sounding so good.

I hope she makes some kind of recordings of the new versions of her songs.  I would buy that just like her early Fugees, the big Fugees, and her solo stock.
Posted by a.eye