Impacting and saving lives - one vote/call at a time

That man and that woman will be in O'Fallon, MO Sunday along with some of the other people in the party. It really makes me hurt inside that people support them and their beliefs. Check that. They support the fact that they are anti-abortion. They support the fact that they are anti-gay marriage. They don't think about the implications of many of their other stances on the citizens of this nation. They don't think about what will change/remain horrible for them and others in this nation. They stick with them because their church leaders tell them to vote against abortion (rather than just not having one themselves) and tells them to vote against a constitutional amendment to legalize gay marriage. They want to keep taxes low. But they don't care that the tax system is disproportionate to people's incomes.

They don't recognize their impact and hatred for people of this nation.

On another note, I do. In fact KBO and I saved a man's life yesterday.

We were going to meet some other cool blogger people for dinner. When I got out of her car I noticed a man laying on the sidewalk. I was speechless and just pointing. When she came around the car to start walking down the sidewalk he started to seize uncontrollably. I have seen people have seizures, but never some as long and as convulsive as this one he was having. I immediately called 911 and gave them the location. They asked me a series of questions that I could not answer (does he have a history of seizures, is he diabetic). I interrupted the man a few times to let him know that I did not know the guy and so could not answer his questions and he told me that I still had to tell him "I don't know" when he 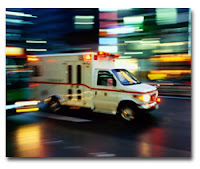 asked them. KBO talked with and tried to calm the man down and make sure he didn't get up while I was on the phone with the operator. The ambulance came and the paramedics started to try and assist him.

He did not want their help. He said that he did have history of seizures, that he had been taking medicine for them before, but had stopped.

This made me super pissed. Likely, he does not have insurance, and can't pay the exorbitant price for the ambulance let alone the hospital care. He said he wanted them to just take him to his daughter's house. They said they would at least give him some oxygen. Then they sent us away. A few minutes, after we had met up with our company at dinner, we heard an ambulance with sirens pass by -- likely him.

It took me awhile for all the adrenaline to pass through my body and for me to stop shaking, slow my heart beat, and for me to just generally calm down from my anger at the whole situation.

Insurance is another issue people should seriously look at when trying to pick a candidate. Not that some people are really looking to "pick" a candidate -- they will just go with whoever their friends/church/Fox News etc tell them to vote for.
Posted by a.eye