Ain't gonna hurt nobody... we just dancin' y'all

I used to be pretty good at determining someone's age. As I've gotten older, it's gotten harder. I guess because people age differently. Yesterday during lunch, the guy in the classroom across the hall said his age at lunch and I almost spat out my food. He is the same age as me, but I totally thought he was at least 6-7 years older than me. Now I can't stop looking at him and wondering why he looks so old.

When I was younger there were always television shows where young adults would play high schoolers. One of the worst was the grown-ass woman who played the newspaper dork Andrea 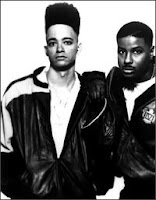 Zuckerman on the original 90210 - Gabrielle Carteris. She and Dylan McKay (Luke Perry) looked like they could be parents or at least teachers of some of the other cast members.

The other day on the radio they were doing their daily trivia contest while I drove home. One of the questions asked which group Kid n' Play were back up dancers for before they made it big on their own. I didn't and still am not sure of the answer.

But thinking of them made me do some trying to find out what they are up to these days.

They came out with the first House Party movie in 1990.

I'm pretty sure the movie was set in high school. Christopher Reid ("Kid" -- the one with the 6"-high-no-fade-hi-top box) was 26 in the first flick. Christopher Martin ("Play" -- the one almost always in the 8-ball jackets) was 28.

I feel duped. I wonder if I'm the only one. I thought they were truly young. But I guess that is no better than "The Golden Girls" with Estelle Getty (Sophia -- Dorothy's mother) being younger than several of her costars.

Here's a treat for you -- some video of the crew dancing. Please check out not only the main character's dancing and clothes, but also the guy wearing orange behind the ladies with the blondish tall box.

And Robbin Harris (RIP) was hilarious in this and all his movies.
Posted by a.eye

Email ThisBlogThis!Share to TwitterShare to FacebookShare to Pinterest
Labels: age is more than a number