Haiti needs help - be careful how you give it

My thoughts keep getting back to the people in Haiti for many reasons.  One is the damage that has occurred due to the earthquake this week.  Another reason is because I have long been questioning what has been going on with regard to aid in that nation.  As the news keeps announcing, they are the poorest nation in the western hemisphere.

They are also a large recipient of aid from various nations and organizations throughout the world.  From 1990-2003 they received over $4 billion in aid.

I am by no means saying that they don't need help, but I am saying we really need to be thinking about and addressing what is going on in that nation and with the people trying to help them.

If you want to give them aid at this time, please read on and really look into what you are doing and who you are doing it through.  You can use charitynavigator.org and guidestar to check on the status and spending of organizations you wish to donate to or that you wish to know more about.

A lot of the aid they receive comes from Non-governmental organizations (NGOs).  These sort of organizations have a history of aid, but also are so large that at times they are not really giving as much money as people think to the "charities" they are supposed to be supporting.

They are organizations who use their money to basically promote their liberal ideology.

They help those who they feel are less off than themselves.  It is the same as people in this nation who basically give money to charities.  They give money, they give water, they give food, they give used or new clothes -- all helping them to feel better about themselves.  If they give a little to help the lesser of those, then it does not really hurt for them to live in their fancy homes.  It is ok for them to eat at fancy places.  It is acceptable for them to by clothes, cars, and other items in excess.

They provide aid, but are not really addressing the problem.  Most of these organizations are not doing anything to really solve the problems.  They are not helping the people to gain jobs.  They may help some one learn to farm (which is great), but they are not helping them to be able to transport their food to various parts of their nation so that they can help sustain more people.

The typical solutions are not sustainable.

Aid agencies and foreign governments often do not fully involve the local leaders in making decisions about what will truly help the nation succeed.

And with Haiti, although there were 28 countries gathered together spring 2009 for the International Donor's Conference who agreed to provide the island nation with $353 million to help reduce poverty, there is really not much to show for all the aid that has been given to them over all these years.

I believe it ties back to the start of the nation.  It is a proud history for them as the enslaved people of Haiti were able to overthrow their oppressors back in 1791.  They were named a republic officially in 1804.  They had been ruled by the French and the French were not easily going to give up a colony of theirs full of people they could force to work and build the imperial status of France.  They demanded for Haiti to pay the French government 150 million gold francs (which in today's dollars would be about $20 billion).  The Haitians spent over 100 years trying to pay this off since they felt it would help them become stable since they would gain acknowledgment and acceptance from the major powers if they completed paying the money out.

That is a lot of debt.  They still have a lot of debt to this day. The debt was at around $1.4 billion in the early part of 2009.  Last year, the US canceled $1.2 billion of the debt.  But that is after they have been working to repay that debt for so long.

Some nations, including Haiti have a history of some corruption.

That is not an excuse for them, and it is not a reason to stop trying to help them out of their situation.

It is a reason to have donors hold the government accountable to the money that is given to them.

How do you keep giving nations money and the people see nothing from it.

Like I said earlier, in just a 13 year period, the island of Haiti received over $4 billion.  Think how the people's lives could have been improved if that money had just been distributed to the people.  The nation is one that has not enough food produced on their land to sustain the people.  According to USAID 54% of Haitians live on just over 50 cents a day, unemployment is between 70-80% and over 40% of the people there do not have access to drinkable water.

Providing the people with health services is great, but we need to help them so that they can help themselves.  They need to be taught skills that will help them in the future to be able to build their infrastructure and develop jobs and have an education.  Most of the people there do not have higher than a primary education and only about 52% of the adults over 15 are fully literate.  According to the Council on Hemispheric Affairs, about 30% of Haiti's GDP comes from Haitians living and working abroad sending money back home to their relations.

They need more than just food and water and vaccines.

And they need it from more than the numerous nations that are supposedly helping Haiti.  Seriously.  Look at this massive list of NGOs that are said to be aiding Haiti in some way.  Look how many organizations there are, but what do they have to show for their "aid".

The Council on Hemispheric Affairs says that "[P]art of the problem begins with the widespread notion that over half of international aid goes toward NGO 'overhead' costs."

So be careful when you donate to some of these organizations.  They are basically taking your money and paying themselves with most of it rather than distributing it to the people they are saying they are helping.

Makes sense with regard to Haiti's situation.  Look at that NGO list again.  If all of them are supposed to be giving money or some other sort of aid to Haiti, how is Haiti broke and still in dire conditions?

Also from the Council on Hemispheric Affairs site:

Roger Annis, of the Toronto Haiti Action Committee (THAC) professed that during a 2007 visit to the island, his entourage was repeatedly appealed to by locals to publically disseminate news of the failure of aid programs in order to bring about significant solutions to development issues. “I saw no evidence of Canadian aid programs reaching that desperately poor population,” alleged Annis. The underlying reason that aid is often ineffective is that it is simply not reaching the people on the ground. In addition to holding aid agencies accountable for their commitments, incorporating local communities into the decision of how best to use aid is an approach that could readily improve the effectiveness of the distributed funds. 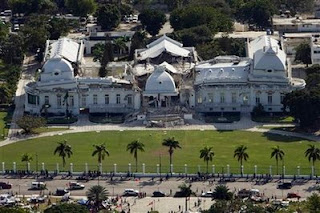 The work being done is not really getting to the people.  The aid agencies are somehow getting donations, saying they are going to help, but really not doing much.

Top that with the different leaders of Haiti that have dug into the coffers and helped themselves to various funds leaving most of their people suffering.

With 9,000 soldiers from 42 countries, led by Brazil, the UN Mission to Stabilize Haiti (MINUSTAH) has spent $2 billion fielding armed patrols throughout Haitian poor neighborhoods to repress and intimidate the people, arbitrarily killing civilians, and sometimes sexually assaulting young girls and women.  In the meantime, the economic conditions worsen and the basic needs of the population remain unmet.

There has to be a better way.

I hope that as you reach out to help the Haitians in their time of need, that you really think about who you are giving money to -- research the organization to find out what they actually do with their money.

Check out the video on Guernicamag.com about aid giving and its impact.

And please don't see the situation as Pat Robertson does -- what a prick.

Thanks for reading my rant.

Here is a link to some information on what Wyclef Jean has done with his donations in the past.  Just what I talked about here. Not sure if this is some sort of action to attack him and get people to not give to his organization or what.  I just hope that money gets to the people and the people that can help the people.
Posted by a.eye