I will be a rock star parent

Despite some occasional fears about my ability to be a good parent, as each day passes and I see/read what other people do with their children, I realize that I will be a rock-star parent when given the chance.

A US soldier is charged with assault after waterboarding his child.  For not reciting the ABCs. 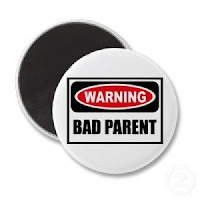 For not saying her letters.

A teacher today told me that she heard of a parent who took her young children to a self-service car wash and sprayed the kids with the water for a punishment. As though she is a cop from the 1950s and 1960s.

I will be grand at parenting.

I understand that kids can be frustrating at times.  I have seen them in public, I have baby sat them, I teach over 100 of them each semester every school year.

I know I will be at better than these and other people.  Including the pastor who pulled a gun on his kid due to the kids lack of attendance at church.  Or the parent who executed his naked son over an argument.
Posted by a.eye

Email ThisBlogThis!Share to TwitterShare to FacebookShare to Pinterest
Labels: aahhhhh, crazy people, dumb asses, i wish a mo-fo would