You may rejoice, I (still) must mourn

For this holiday, I take you back to my thoughts from 2008.  Here is some content from the original blog post: The 4th of July is Yours, Not Mine.  Unfortunately, my sentiments still ring true today, four years later.   Only thing I can add is that you should be careful with the fireworks in all the places that have been super hot and dry of late.  Only change to my writing is the video at the end, the original is no longer available, so the one I added today has no commentary and no additional song - though, it is still the shiznit, though! 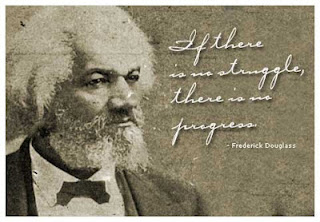 Since I was a kid and started reading about the history of this country (on my own of course, since the schools didn't teach the truth -- just the apple pies, George Washington, Lincoln BS) I have not really been down with celebrating July 4 as any sort of independence day.

There are too many groups in this nation that are not free, too many people who continue to struggle due to the incredible injustices perpetuated by the government (national, local, and state).

I love these words by Langston Hughes and Frederick Douglass.

Douglass' words can STILL apply to basically any minority group in this nation (not just ethnic minorities, either -- sexual, economic (though the poor are the majority), displaced, etc). This comes from a speech he gave 5 July 1852. It was an event commemorating the signing of the Declaration of Independence.

"This Fourth of July is yours, not mine. You may rejoice, I must mourn." And he asked them, "Do you mean, citizens, to mock me, by asking me to speak to-day?"

What, to the American slave, is your 4th of July? I answer; a day that reveals to him, more than all other days in the year, the gross injustice and cruelty to which he is the constant victim. To him, your celebration is a sham; your boasted liberty, an unholy license; your national greatness, swelling vanity; your sound of rejoicing are empty and heartless; your denunciation of tyrants brass fronted impudence; your shout of liberty and equality, hollow mockery; your prayers and hymns, your sermons and thanks-givings, with all your religious parade and solemnity, are to him, mere bombast, fraud, deception, impiety, and hypocrisy -- a thin veil to cover up crimes which would disgrace a nation of savages. There is not a nation on the earth guilty of practices more shocking and bloody than are the people of the United States, at this very hour.

Two pieces from Langston Hughes, the first from 1938:

Let America be America again. Let it be the dream it used to be. Let it be the pioneer on the plain Seeking a home where he himself is free.
(America never was America to me.)
Let America be the dream the dreamers dreamed-- Let it be that great strong land of love Where never kings connive nor tyrants scheme That any man be crushed by one above.
(It never was America to me.)
O, let my land be a land where Liberty Is crowned with no false patriotic wreath, But opportunity is real, and life is free, Equality is in the air we breathe.
(There's never been equality for me, Nor freedom in this "homeland of the free.")
Say, who are you that mumbles in the dark? And who are you that draws your veil across the stars?
I am the poor white, fooled and pushed apart, I am the Negro bearing slavery's scars. I am the red man driven from the land, I am the immigrant clutching the hope I seek-- And finding only the same old stupid plan Of dog eat dog, of mighty crush the weak.
I am the young man, full of strength and hope, Tangled in that ancient endless chain Of profit, power, gain, of grab the land! Of grab the gold! Of grab the ways of satisfying need! Of work the men! Of take the pay! Of owning everything for one's own greed!
I am the farmer, bondsman to the soil. I am the worker sold to the machine. I am the Negro, servant to you all. I am the people, humble, hungry, mean-- Hungry yet today despite the dream. Beaten yet today--O, Pioneers! I am the man who never got ahead, The poorest worker bartered through the years.
Yet I'm the one who dreamt our basic dream In the Old World while still a serf of kings, Who dreamt a dream so strong, so brave, so true, That even yet its mighty daring sings In every brick and stone, in every furrow turned That's made America the land it has become. O, I'm the man who sailed those early seas In search of what I meant to be my home-- For I'm the one who left dark Ireland's shore, And Poland's plain, and England's grassy lea, And torn from Black Africa's strand I came To build a "homeland of the free."
The free?
Who said the free? Not me? Surely not me? The millions on relief today? The millions shot down when we strike? The millions who have nothing for our pay? For all the dreams we've dreamed And all the songs we've sung And all the hopes we've held And all the flags we've hung, The millions who have nothing for our pay-- Except the dream that's almost dead today.
O, let America be America again-- The land that never has been yet-- And yet must be--the land where every man is free. The land that's mine--the poor man's, Indian's, Negro's, ME-- Who made America, Whose sweat and blood, whose faith and pain, Whose hand at the foundry, whose plow in the rain, Must bring back our mighty dream again.
Sure, call me any ugly name you choose-- The steel of freedom does not stain. From those who live like leeches on the people's lives, We must take back our land again, America!
O, yes, I say it plain, America never was America to me, And yet I swear this oath-- America will be!
Out of the rack and ruin of our gangster death, The rape and rot of graft, and stealth, and lies, We, the people, must redeem The land, the mines, the plants, the rivers. The mountains and the endless plain-- All, all the stretch of these great green states-- And make America again!

This poem was written by Hughes in 1925:

I, Too, Sing America

I, too, sing America.

I am the darker brother.
They send me to eat in the kitchen
When company comes,
But I laugh,
And eat well,
And grow strong.

Tomorrow,
I'll be at the table
When company comes.
Nobody'll dare
Say to me,
"Eat in the kitchen,"
Then.

Besides,
They'll see how beautiful I am
And be ashamed --

Be careful with the fireworks and explosive devises -- don't blow your hands off. Have a sober driver. Don't eat so much that you have to undo the button on your pants.

Try to think about what this day really means for all the people in this nation.

Remember that everyone is not free.

I leave you with possibly the most awesome version of this country's anthem EVER! Along with another great little song after the anthem. I love the commentary in the beginning and the end.

Email ThisBlogThis!Share to TwitterShare to FacebookShare to Pinterest
Labels: 4th of july, awesome speech, beauty, discussions on race, i too am america, impressiveness, internalized racism, one day on earth, racism