Two weeks worth of photos with prompts by Fat Mum Slim.

5. The amount of funk that some ballerinas produced in the studio prior to my fitness class was unbelievable! Even from the lobby, shown here, you could smell them when they opened the door. I thought ballet people were supposed to smell dainty and like flowers and candy.

6. My first pairs of non-white/black socks ever.  I decided to go pretty bright.

7. This sandwich had my name written all over it at lunchtime!!

8. I think this place might be selling the mannequins, but I'm not sure.  The orange coloring and the provocative poses always gets my attention, though.

9. Didn't really feel guilty eating these, but it was a pleasure.

10. Snow did not fall as much in Manhattan as it did in Long Island, but it was enough to shut some people down from wanting to clear their cars.

11. Lost a pair on the way to work.  Replaced them with these peaceimages pieces that arrived in the mail on this day.  Love the!

12. I did not eat this for lunch but a student tried to sneak it into my classroom (freshly popped and aromas going all over the place) for her lunch.  I wrote more about it here.

13. walking - I wrote this past week about how I may have caused a fire in the school.  Here is a picture of the front area where the fire happened.  I'm still trying to understand how the security people and the others in the front hallway did not contain the fire with the fire extinguisher right there (two doors from where the fire took place - as well as one in the room directly to the left of the fire location), or make some calls to people who could before it became to big and I had to stand outside for an hour with no coat and a thin-ass sweater before walking to another school who would be our safe-site. 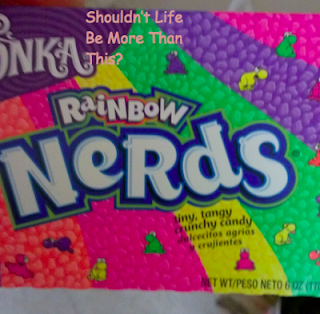 14. love is - Sometimes love is something as simple as sharing a box of Nerds.

15. Pretty bare until my Sunday (this week Tuesday since I didn't have to work) runs to Trader Joe's.

16. Great brunch with great people after a great workout.  Good times lasted well into the evening.

17. Friday at the end of the school day, I spilled some tea onto my laptop.  I started first aid on it that day and did surgery on it Saturday and Sunday by removing various keys and cleaning them several times.  I felt really technologically competent - especially after it still worked and all the keys went back on the correct spaces.

18. I was craving something sweet.  I couldn't think of what I wanted, so I bought these.  They are not tasty.  They are pretty disgusting.  Throughout the day, I ate three anyway.
Posted by a.eye

Email ThisBlogThis!Share to TwitterShare to FacebookShare to Pinterest
Labels: annoyances, beauty, beginnings, family time, i wish a mo-fo would, its too early for all this, photo-a-day, teaching