On September 17 of last fall, I went to the Department of Education to get them to recognize my previous years of teaching experience.  I filled out forms, gave them resumes, wrote down references, and probably some more things that I can't remember since that was months ago.

They really don't want to give me the money that I am owed.  It took me forever for them to pay me the correct salary for my earned master's degree.

Yesterday, I received the email message to the right from the DOE saying that they have FINALLY confirmed my records and that I am finally going to receive the correct salary.  Despite my 9 previous years of teaching, the DOE was paying me the same as a first year teacher.  I had actually forgotten that this had not gone through yet since it was six months ago.

It won't start for a few more pay periods, but once it does, I expect to finally be able to start saving money and to finally not feel like I felt my first year of teaching.  Well, not even then, because at that point, the little money that I was making seemed like a lot since I was going from virtually no income in college to a full time salary.

I am hoping that I get a big lumpsum amount with the first new paycheck to cover the back pay that they owe me from not getting the right salary since September.

Despite the fact that it is not really so, when I saw that email, the first thought that came to my head was  Dave Chapelle: 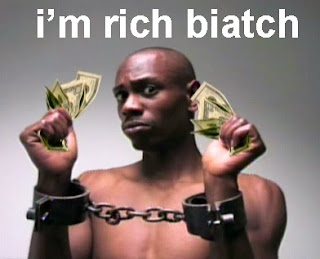 Email ThisBlogThis!Share to TwitterShare to FacebookShare to Pinterest
Labels: aahhhhh, annoyances, i wish a mo-fo would, reset my life