Poverty, insurance, and fixing education and a washer

Not too much been going on with me. Hanging out with my man while he is in town has been taking up most of my time - definitely a good thing. As has school and reading about what is going on in our nation. 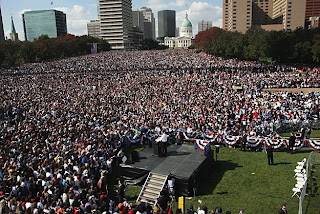 I also spent my time Saturday celebrating that I was not taking part in my old school's Renaissance Fair. Apparently the turn out was not as good as they thought it would be. They say that it was due to the Obama rally in downtown Saint Louis. I guess if that rally hadn't gone on, there would have been 100,000 people at the fair instead of supporting that candidate.

I have really not been as shocked as other people seem to be that there are so many people in society that do not know much about the politics of their nation, or about who is in office representing them. People don't care about that stuff. People only care about Madonna's divorce and when the sequel to Sex and the City will be out.

It all really goes to explain why so many people are willing to vote for people without actual facts.

Sarahlynn, wrote a good blog post about the insurance proposals of the candidates. Interesting read. Good information about who will be helped and hurt with the plan of my friend McCain. (Why does he insist on calling me that? I do not like him. He is not my friend. Him saying that does not lead me to like him more.)

John Dolan wrote an excellent article about the economic struggles he went through and gives some advice to the rest of us who are ever closer to such status as he faced. I don't think people realize just how close they are to poverty. Most people are two pay checks away. I am about there, so I can't imagine the people that are on two salaries being that close. Well... I guess I can since they are all looking to live like the Jones and the Bumquishas that are around them. Have to buy more than the neighbors. Have to drive a new car. Have to buy a ton of new clothes for the new season. Have to buy a ton of stocks that are now suffering.

Been avoiding NPR a bit lately. They messed up and started their seasonal fund drive the day after the debates last week. Sucked because I was really trying to hear what they had to say about it. Really does not make my commutes run well when they are coming on every five minutes to tell me to give money. I gave. Hopefully they stop and get back to the regularly scheduled programming.

Today I had to take a personal day to address the washer that has still not been fixed after 5 trips from the Sears people. Got to listen to Diane Rehm's show. Today just happened to be on education and the candidates plans to address that little issue. Some of the things that McCain is planning really just don't make sense. Let's continue to underfund the early childhood education programs. Let's get more unqualified teachers into the classrooms with his troops to teachers plan (among others). Let's allow vouchers instead of improving the schools that people may want to leave. Let's not address the discrepancies in property taxes that exist in the areas that have poor schools. Instead let's make it easier for people to move out of those areas and build houses far from those problems instead of fixing the schools, funding them, providing more programs and motivation for the students to perform better.

I really didn't want to watch the last debate. I actually watched the Project Runway season finale instead. But once that show was over, I flipped to the debate in time to hear the bull shit about education from the candidates. I'm not saying that Obama's plans are perfect. But they make more sense about how to fix the system so that we are not lower than so many other nations when it comes to education.

I'm off to research this washer and find out if more people are having the same troubles that I am. Then I can get to planning more for upcoming classes, and catching up on Lost. I was rushing to watch all the past seasons until I found out that the new season does not start until early 2009. What?! At least I have time to catch up since I just started watching it in the middle of last season.

I leave you with this from Kansas City. A man was given back a receipt with the racial slur "Dumb Nigger" on it to identify who the customer was. What?! Yes. Read up.
Posted by a.eye