Bloggers Unite for Refugees 10 Nov 08: A bit on Iraq displacement

Today is another of those occasions when Bloggers Unite for a cause -- this time about refugees. 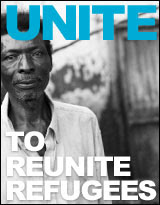 Since the United States has been in Iraq for a long time and seems as though the occupation will never cease, I decided to touch on a bit of the refugee problems in that nation.

According to the United Nations High Commissioner for Refugees, 4.7 million Iraqis have had to leave their homes. They go either to other nations or to other cities that are not threatened by war violence. According to Refugees International a lot of the people fleeing their homes are moving into neighborhoods that are more homogeneous making relations more divided based on the sects. Many of them move into homes of the opposite group who fled to another region or another nation.

Many of these families have been separated -- children from parents, spouses from their lovers. It's sad. It's horrifying. I can't imagine this happening to me or any one I know. Yet, it is happening to so many throughout the world.

Not only does this cause problems for the nation, so does the number of professionals leaving the nation or leaving the regions where they once lived. An older Time Magazine article wrote that "Iraq's doctors, once considered the best in the Arab world, no longer have access to advances in medical science because they have no books, no Internet connections and barely any money to attend international conferences." Now they all flee for better, safer jobs in other regions of the nation or other regions of the world. This leaves the hospitals searching for ways to lure doctors back to the region with higher salaries and better protection.

But who are they kidding? Why would you go back there when there are constantly bombings, whether by suicide bombers, U.S. military, or the hired help? Some people have returned to their homes in Iraq - this is used by the U.S. to show the success of its "surge" - but there have been no strategies developed to really alleviate the problems under the surface in this nation. Iraq needs help figuring out how to create and maintain peace, how to convince the displaced that it is safe to return, and how to settle economic and property disputes that will inevitably surface upon the return of the masses if they choose to go back home.

If Sweden can admit 80,000+ Iraqi refugees, then, surely, the United States can do more.

This is international. But there are refugees in every state of this United States, and all over the world. And they are not all Iraqi. There are problems occurring throughout the world in nations that are not publicized in the mainstream media that need assistance.

You can easily look up what people in your local area are doing to help the people who have come for safe-keeping in your city or state or nation.

Here are a few sites with more information:
In St. Louis: