The rally today was really inspiring. It was great to see so many people willing to stand out for two hours in 30-degree weather to show their disdain for newly passed laws and their support for rights for all humans. Locally we had over 1400 people in attendance, according to the po-pos. (black, white, Latino, Asian, gay, bi-sexual, straight, young, old, pets) Nationwide they said that there were over 1 million people in over 300 cities. All trying to show protests for the legislation and to try to make sure that people don't give up the fight. Locally, they are also trying to put legislation up (again) to make it illegal to discriminate against people in the workplace based on their sexual orientation. Right now in Missouri it is legal to do just that in every area except St. Louis City, Columbia, Kansas City, and University City. 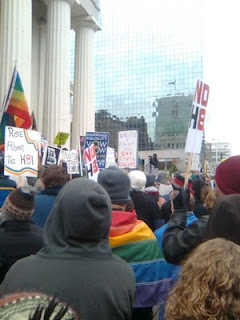 The mayor of the city spoke, along with some alder-people, several religious figures, some community activists, a bank CEO, some students, and Chad Allen -- the introduction of him by the MC brought me some serious giggles. He is from "Dr. Quinn, Medicine Woman". And the MC seemed to realize that not too many people watched that show, but said after Chad spoke that he would go off and buy all the back ordered issues of the old DVDs for the show.

It was great seeing a lot of young people out there. There were college-aged students, and even some high school students and younger there. Some students from my school's GSA and my old school's GSA were there - which was really great to see. Hearing the different comments, seeing people able to be free and in love with their partners in public in front of the courthouse, seeing people's documents from when they had gotten married in California (pre-ban), hearing the hope -- it was all heartwarming. I actually, a few times, forgot how cold it was out there when rushes of warmth would go through my body. 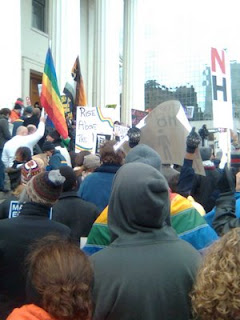 What was really awesome was seeing a good number of straight people there. (Thanks Dando for going with me.) This is what will really make the difference. 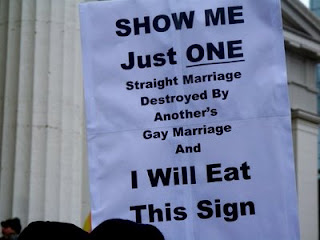 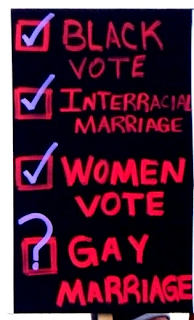 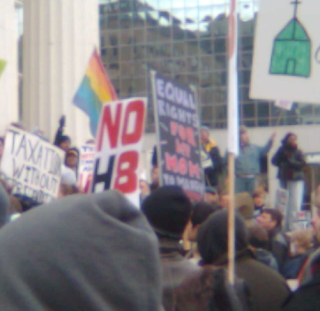 The majority needs to change its views in order for laws to change.

Links with information and pictures:
Human rights are just that -- for all humans.

"With liberty and justice for all." -- Pledge of Allegiance to America
Posted by a.eye