53 countries in Africa... why can't you specify which you refer to

I found an article yesterday titled "Giant Crack in Africa Will Create a New Ocean".

I don't believe I have ever read about any event/activity in any parts of Europe where they generalize the whole continent. Or Asia. Or even South America. Even when people go to Antarctica they use the different coordinates to designate which part of that ice island they are occupying.

There are 53 countries in Africa.

Is it that hard to say that the crack is in Ethiopia? 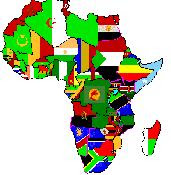 Even the countries that look small on the distorted maps that people typically use are larger than several states that are here in the US.

I have had people in my parents' church go to numerous places in the world to proselytize and each time before they go, they stand in front of the church and tell the specific cities and the countries where they will be going.

Except when they go to the Motherland.

Then they are just going to Africa.

This is why I introduced an African Studies class at my last school and why I am in the process of trying to get one started at my current school.

I almost understand Europeans old-school ignorance when they thought it was a "dark continent" because they had not explored it, but times have changed. People have seen the vast wonders of the land. We are no longer in the age of Livingstone.

Africa is a continent. Not a country.
Posted by a.eye

Email ThisBlogThis!Share to TwitterShare to FacebookShare to Pinterest
Labels: aahhhhh, africa, annoyances, i wish a mo-fo would, teaching