I want to be a smooth criminal

Big Bro used to have this red leather jacket with a ton of zippers, buckles, and sparkliness.

Yes -- the Michael Jackson "Beat It" jacket. We even had some white gloves we would don and try to practice some dance moves. For some reason, the cheap stores, like Venture, never had glittery gloves. And f

or whatever reason, I guess his seniority (and maybe because he felt more deserving since he had balls like Michael Jackson and the only balls I had were actually ovaries), my brother always got to wear the right glove and I was stuck being a left-handed Michael reject -- most of the time with an imaginary jacket since he usually got to wear it. I felt so deprived.

And yes, Mr. Jackson was as cute as could be. Look at him -- that smile, that weird t-shirt he is wearing with the mythological beasts, the blush, the superman-like curl coming down his forehead. When I describe him, it sounds really cheesy, which he was, but he was still too cute. The only thing I really couldn't get down with was the flooding pants. At first I thought that maybe he just didn't have enough money to buy pants that fit him. That he was wearing the hand-me-downs of his older brothers (and even sisters) and that his parents were waiting for the older ones to grow out of theirs so that Michael would finally get a pair of pants to wear that would finally fit his body. I also initially found it disturbing that he would wear white socks with his black pants and black shoes. Though, later I realized that it probably was his technique to make people focus on the amazing dance moves he was doing.

Which bring me to my main points:

1. This man is beyond amazing! His videos used to be premiered in prime-time, on regular network television stations. And they were stories -- like mini-movies.

2. Every one loves "Thriller". But people seem to sleep on "Smooth Criminal".

3. This video is full of not just lousy acting by little kids, but also almost decent acting by the grown ups, crisp movements by Michael, the amazing quarter toss into the jukebox, crime, passion, Michael's superhuman ability to crush a cue ball with his bare hands, many unintelligible words sung by Michael himself, 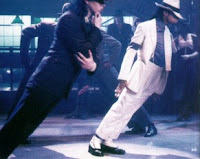 and some absolutely AMAZING dancing. Dancing that to this day influences musicians from all sorts of genres.

I remember first seeing the part where he and his male comrades are dancing and suddenly lean to the front/side hellaz. You cannot imagine the rug burns and the wrist aches I incurred from trying to do that move. I soon discovered that the move was rigged and that they had some special contraptions that helped them be able to do the move. Contraptions that I would be unable to afford.

4. I started realizing that Michael Jackson had the gang thing down to a science. A science that would leave followers of his gangs unscathed. Seriously, in all his major videos there is some gang-type action, but no one ever gets hurt -- "Beat It," "I'm Bad," "Thriller," that one video I always forget the title to with the hot chick Michael never really let touch him and the car and the whole video is dark and shadow-like (this one isn't really gang related, but he does look hard, well, as hard as Michael Jackson can look). I just had to figure out a way to get a group of people who would follow me. People who looked like they could beat your ass but, more importantly, could break into dance at the drop of a dime -- coordinated, choreographed dance. And I would have to find a nemesis who was like-minded. A group of enemies that could get all angry, but instead of going for the Gat would pull out a head band to hold back their hair as we battled on cardboard break dancing.

5. Besides the dancing and the pseudo-gang activity, the song also influenced me and at least one of my sisters in another way.

6. Yes, we were, and still are super corny, super silly, and super loving some "Smooth Criminal". I'm not at the point of the girl in the (I think) Pepsi commercial who says "MichaelweLOVEyou!!!" and then proceeds to start crying and look like she is about to experience either a seizure, an orgasm, a heart attack, or sudden death because she came close to almost being close enough to almost feel the sweat of a person who might be able to catch a whiff of the gherri curl juice Michael whipped over to stage right as he turned to perform his signature Moonwalk.

If you forgot what it's all about, please, watch the video. It's about 10 minutes, but is totally worth it.


UPDATE: By the way... I just read one of my favorite hystarical blogs and he also was writing about videos. I guess great minds think alike. Though his is freaking hilarious. Check it out. He writes about the modern videos and their lack of creativity.

Email ThisBlogThis!Share to TwitterShare to FacebookShare to Pinterest
Labels: age is more than a number, annie are you ok, michael jackson, smooth criminal