So, the All-Star Game (baseball) is in town. Which means the city officials have finally decided to clean up some of the garbage in the area, redo some broken windows, and hide the homeless for a few days.

A lot of people I know are talking about the festivities that have been going on since the weekend. They have bragged about getting tickets, talked about going to the America's Center to do some of the games, going to the celebrity softball game, and ventured to the down town area to go to some parties in the hopes of ogling over some famous people that they might just see.

I don't know why they keep telling me about these things, or talking about baseball in front of me at all.

I would rather smoke meth, become addicted to meth, have my face sink in and become acne scarred as my teeth continuously fall out even from eating apple sauce, spend all my money on meth, sit in the house in a drug induced coma until I need the next fix, then go to one of corners of Forest Park Parkway and beg for more money from the people who drive by and curse me and spit on me, at which point I would spit back at them, get arrested and have a nice free place to stay for awhile since I would be evicted from lack of paying rent and from stealing from the neighbors to pawn their flat screens, video games, and fried chicken, as well as sell their gold jewelry to Gold4Cash.com to get my next fix for the meth that would slowly kill me. Then the police would kick me out and I would sleep in the park across from Union Station down town, or crash in one of the abandoned homes the city did not fix up since they are more than 10 blocks from 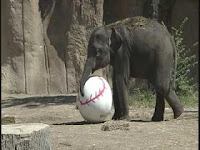 Busch Stadium waiting to come down enough to steal some more to get more drugs and possibly go to 7-11 for a Slurpy and a corn dog, which ordinarily I despise, but on meth, they might be good.

This is what I would rather do than even think about considering going to / attending / viewing / hearing about / even seeing pictures of anything having to do with baseball.

I don't even want to drive on the part of Highway 70 that was named after Mark McGuire. I don't want to go to the zoo unless I can be guaranteed not to see animals playing with giant baseballs.

I only hope that if I have kids, they do not have an interest in little league.

Just a few more days until the fanfare is over in this town.
Posted by a.eye

Email ThisBlogThis!Share to TwitterShare to FacebookShare to Pinterest
Labels: aahhhhh, annoyances, i wish a mo-fo would