Last night, I made it work

Ordinarily, I am pretty good at keeping a straight face.

He is such an amazing person! 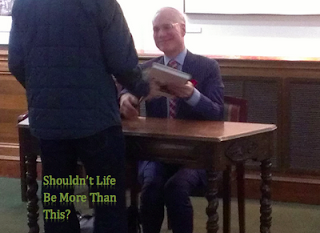 I cannot even begin to express my awe for this man.  I think he is super cute and love how he tells people to "make it work" on Project Runway.  I love how he helps the cast members without putting them down, I love how he is just at peace with himself.

Last night, I was so giddy to hear him speak at the 92nd Street Y that I was literally smiling the entire time he was talking with Bud Mishkin.

I love his large vocabulary (which makes me want to get a thesaurus and learn at least a new word each month - if not more).  I love that he said that he is "a sycophant of the written word," - that he says he gets emotional just thinking of different passages from some of his favorite books.  I love that when the group of lady teacher-colleagues I was with and I met him he talked about how he is kind of ashamed of having Webster's Dictionary downloaded (since it is not the best of the best of dictionaries), and that he is afraid to look at the 800+ words that have been added to the dictionary.

I love that he wrote a detailed book on the history of fashion items in your closet.  I read through a lot of the sections and love his comedic sense.

He told stories of Project Runway and judge deliberations, of his disgust that Mondo did not win his season.  He told stories of his father, of his mother, of his time at Woodstock, of where he got the suit he was wearing.  He was friendly the entire time... even as we were getting our books signed after 11.

I love that we both have a hate for capri pants.  They are so unattractive on most women (and men) that wear them.  He goes into detail about them in the book, too.  It is hilarious and they are hideous!

It was a late night - didn't get home until after 11:30 - but well worth the lack of sleep for the night.
Posted by a.eye