Today, bloggers across the world are taking action to write about human rights (Bloggers Unite May 15, 2008). At first when I agreed I was pretty pumped. And thought this would be really easy to do. Write about the different human rights abuses that take place on the daily. 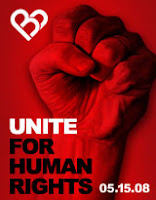 But there in lies the difficulty. They take place so often, that I found it hard to even narrow down the choices so I would not be rambling on incessantly.

No, not chains, the middle passage, and welts on black men's backs.

Modern-day slavery. Yes. It still exists. In the United States of America. It did not end with the 13th Amendment in the mid 1800s. "Neither slavery nor involuntary servitude, except as punishment for crime whereof the party shall have been duly convicted, shall exist within the United States, or any place subject to their jurisdiction" (text of the US Constitution from 1865)

It still happens. It is camouflaged in different ways -- has been since it "ended". I have learned about the concept, taught about it to my students, and recently learned of John Bowe's book "Nobodies: Modern American Slave Labor and the Dark Side of the New Global Economy." Bowe defines a slave as " a person not free to leave their job, held in place by violence or the threat of violence, to be exploited by someone else." After the legal abolition of slavery there were Black Codes that would punish African Americans with forced labor when they committed even the smallest crimes (I suppose the amendment was likely written with this sort of thing in mind), Codes that would only allow them to buy land in rural areas (plantations), the idea of tenant farming. There are still indentured servants who come to this nation to help someone by working for them, and then are indebted indefinitely as they work to pay off the ticket over here, the food they are provided, the clothes they are given, etc. This is 2008.

According to the Human Rights Center, "forced labor is prevalent in five sectors of the U.S. economy: prostitution and sex services (46%), domestic service (27%), agriculture (10%), sweatshop/factory (5%), and restaurant and hotel work (4%)."


Most of these people do not go out asking for help when they suffer the horrid conditions they endure. They are afraid of the repercussions -- after all, many are illegal immigrants, and people who still have a semblance of pride, and they do not want to have to give up the little money they have earned. And, just like most of you, they are not super trusting of the police. Human trafficking is a federal crime, and a lot of the agents/officers involved need to be better trained in how to deal with the victims of these crimes.

Now, this slavery is not always a free-labor arrangement. Many of these modern-day enslaved people make some money. The operative word, though, is some. In many cases, they are not given enough money to survive on their own.

The Human Rights Center recommends that the government take the following action to help curb human trafficking and the forced labor of human beings:

Most importantly, people need to make sure they are paying their workers a living wage. And if you don't have a posse working for you, make sure you do what you can to get your legislatures to ensure people earn a living wage.

Enough money to actually be able to get a place to stay, buy food for each member of the household, pay bills, have enough clothing to withstand the elements and feel comfortable about going out in public, and find some mode of transportation (public or individual).