Almost every kid dreams of going to Disney World. Shoot... it used to be that every championship team in an athletic event wanted to go there after winning the Big Game.

But it seems that that dream has continued to fade as people realize in their adult lives that Disney World/Land is not as perfect as it purports to be. They force everyone to dress a like even down to the facial hair on men and ear ring size and number on women.

name of Disney Couture. (Thanks VB for the heads up) I'm not sure if it is officially associated with Disney, but I'm wondering (if the line is as big as the sites says and is worn by celebrities like Lindsey Lohan and Paris Hilton) why Disney has not stepped in to stop the sale of this item. This is really crazy. I cannot support this even if it is supposed to be associated with a family friendly film. 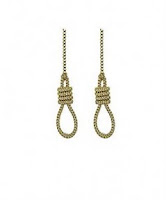 This is offensive. Noose jewelry should not be advertised as couture.

I'm still not sure which is worse -- that they made this product, or that people will actually buy it and wear it proudly.
Posted by a.eye

Email ThisBlogThis!Share to TwitterShare to FacebookShare to Pinterest
Labels: annoyances, beauty, discussions on race, dumb asses, i wish a mo-fo would