Great people in NYC and DC

One of the best parts of my NYC, DC trip was the cool people I hung out with, met, and stayed with. 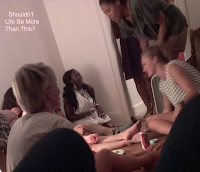 Early in the trip, I hung out with one of my old college teammates (who is now one of my sister's best friends) at his friend's house for a little get together.  The friend is a choreographer and had a bunch of Swedish friends in town for a few weeks.  He had the little party in their honour.

It was really great seeing them all together.  As my sister, our friend, and the choreographer finished the cooking, I talked with the Swedes, the Norwegian, and the French man (he was the lone male besides the hosts).  There were 10 of them in total, only one was not a dancer.

At first, they were speaking to each other mostly in Swedish, but as the drinks poured, they started talking more with me in English.  They were super friendly, had great stories, and shared the liquids.  I especially loved that two of the Swedes were of African descent - how freakin' cool!

At one point in the night, one of the Swedish dancers tried to remember her new favorite song.  It was one she had recently heard in an NYC club.  It turned out to be "Poison" by Bel Biv Devoe.  From 1990.  Hey, it was new to her.

We listened to that song on YouTube, as well as some of their other old-school favorites including pieces from the Spice Girls and one of my most hated songs, "Who Let the Dogs Out".  I tried not to furl my lip the entire time, which was easy to do since I thought they were so cute as they sung along and danced to the music.

I loved the time with them.

I also came across some great people just walking down the street and sitting in different places where I wandered.

I used to have people tell me that I looked intimidating, so I have worked on relaxing my face and even having a slight smile most of the time (when I can remember).  I guess this has worked, because I was often the person that people came up to for directional help or who came up to me to compliment me on my hair or just to ask how I was doing.

And people say New Yorkers are mean and unfriendly.
Posted by a.eye