A man, his man stick, and a park bench

A brief moment of comedy for you all. (Though for the men, or others who are sensitive to others' feelings, perhaps some pain.)

Unbelievable. This story gets funnier to me the more I read it and really think about what must have been going on.

A man in Hong Kong almost lost his penis as he was humping a metal bench in a park. It happened on 8.8.08, which was said to 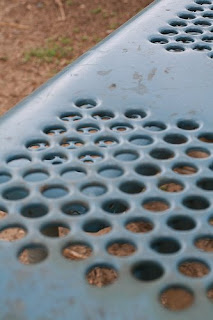 be a lucky day in the culture. He thought he would take advantage of the luck and have at it with a bench full of holes.

Ooohhhh how those benches must have turned him on.

I guess he was bigger than he thought, because he had to call emergency workers to get him free. They came, tried to pull him out -- didn't work. Tried to release some blood from his member -- didn't work. They ended up having to remove the entire bench from the park with him on it and take him to the hospital.

Or you can watch the video here. I'm not sure if the moaning is actually really this man, but it adds to the effectiveness of the video. Especially when you think that his initial moaning probably sounded much different than the way it sounds when he is being rescued. Also imagine what embarrassment this must have been. And was his cellular phone easy to reach or did it cause more pain in him to reach down his pants leg which was likely a bit farther down than normal to reach for it in the pocket? And did he call in a normal manner and try to rationalize his condition, or was he hysterical from the first moment someone answered his call?