Summer is officially over - let the new procrastination begin

It is the time of year that officially means that summer is over. New fall seasons of tv start and the summer shows are ending.

One of my favorites for a couple years has been Weeds. Awesome show! Crazy situations. The first two seasons made me want to upgrade the cable to HBO. The third season was a bit far out, and the fourth just ended. They kind of eased off on some of the craziness, but the end of the season was super-duper -- I don't even know how to describe the weirdness and the basic anger that I felt for some of the characters on the show. 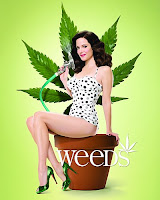 I can now cut off my HBO -- really not even sure why I got it since a lot of the episodes I was watching online, but sometimes it just feels nice to watch it on tv when it is first shown.

Every time the last few seasons have ended, I have said that there is no way I can watch another season of Weeds if it keeps getting more and more crazy, that I would boycott. But maybe they have some sort of crack that comes at you through the screens, because it just keeps me coming back. Maybe I am hoping for some sort of closure, for some sort of resolution, for Nancy to get rich quick and then give it up, for the DEA to hook up with one of the drug dealers, for the chil'run to get kidnapped for doing some stupid stuff, for Celia to just crash and have her children or husband do something really horrible to her (well, that is finally about to happen -- possibly) I don't know, something. But it never seems to happen. There is just more and more drama.

But I am excited to watch another season.

In the mean time, I have a lot of fall shows to use to add to my procrastination-of-necessary-work habit.
Posted by a.eye