When she was younger Kid Sis #3 and me called each other Best Buds.  I don’t remember where the phrase came from, but we had our own special way of holding hands, she only liked me (not any of the other 5 members of the family) to do certain things for her.  She is nine years my junior, but she is awesome.

And she continues to grow into a wonderful adult.

When she was younger she used to complain about how she had to follow the rest of us in school (all four of her older siblings were good students).  Somehow, she managed to surpass all of us in many of her accolades.  She had the highest (or tied for the highest) ACT score of all the chill’run.  She received the state’s scholarship to any state school based on her test scores.  And she got money to run track in college.

She won state championships in high school and set school records (that beat her older sisters'), but I will never forget when she qualified to Nationals at the age of 11 on a team I was an assistant coach with.  It was memorable not only because of her feat in qualifying, but also because of what happened to her, Bio, and me at the end of the trip.

We were flying standby because one of the coaches worked for TWA.  On the way back, we were pushed back more and more flights until finally, they started calling names of some of our teammates and coaches.  One by one, each name was called.  The head coach had his name called and gave all the people who had not been called yet a bright smile, a salute, and a peace sign and then he disappeared into the tunnel.  More names were called.

The only ones left were Kid Sis #3, Bio, and me.  We were not called.  I was 19 and didn’t even have a debit card, forget about a credit card.  We were stuck in Virginia.  The rest of the team and coaches were on the last flight of the day. We were stuck over night in Virginia with no place to stay. 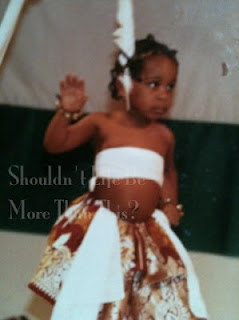 Eventually, we were able to talk to our parents and get a hotel to let us stay over night with Bio’s mother giving her credit card over the phone (which they did not want to do at all).  We had a friend of a friend of a friend of Bio’s mother take us to some fast food place for dinner.  There we were not given food or food money by the people who drove us, we were instead able to split the last few dollars that we had between the three of us and buy the equivalent of a value meal to eat between the three of us.

She is not only a business school grad who is currently earning her MBA while working at a very large successful business in StL.

She bought a house a few years ago and is the first of the siblings (beside the married with children one) who has done so.  And it is a beautifully rehabbed house with awesome floors and she has a tenant staying with her to help pay the mortgage.

What else do I love about her.  The fact that even with her busy schedule, she finds time to be a personal trainer to her friends and my mother.

And even though she was blessed to be thrown money as a childhood dancer (see the like in the picture), she gave back to some other children by spending a lot of time last year tutoring refugees in the city.

Kid Sis #3 has been awesome since her early days when she used to call her older sister "Honey," I adored her then, and I still adore her now!
Posted by a.eye