I'm not a sentimental person.

Though, as I get older, the rom-coms seem to get me teary-eyed, and sometimes, I see things that bring tears to my eye that I would have just laughed at years ago. 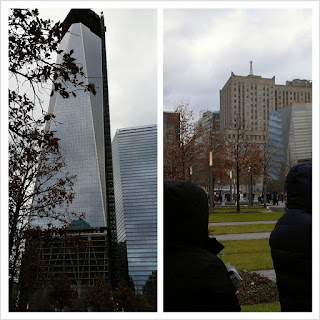 Yesterday, I braved the cold with my brother and went to the World Trade Center site.  We opted for the guided tour and I am glad we did, despite that it was about 35 degrees, I was not dressed for the weather, and the tour took 70 minutes outside in the cold.

It was a lot of great information that I had not known about the building, the day the attacks happened back in 2001, and some of the people who were first responders.   I also learned that all the trees on the current site represent a first responder who was killed.  There are about 100-200 that are not yet planted and will be once the people finish all of the buildings in the the trade center complex.  The missing trees are growing in New Jersey so that they will all be the same height as the ones already planted when they are placed in the garden area.

There is a beautiful memorial bronze piece just outside of the makeshift museum (the real museum is not finished due to some BS arguments over money and ownership or something).

I started to cry three times after the tour when I was in the "museum" looking at the images, hearing the voices, and seeing the recovered items from the wreckage.

I think it hit me more to see the sites of the smoke and the destruction now that I am in NYC and know the area and have been down to the area where the buildings were several times.  I have sat to have lunch in front of the new building 7, I have walked past the hole before it was a beautiful waterfall memorial.  I now know that the buildings that are there now are about half the height of the old trade center buildings - so incredibly impressive, especially after I went into the Empire State Building two days ago.  The towers were taller than I was high in that current building.

It was really moving.
Posted by a.eye

Email ThisBlogThis!Share to TwitterShare to FacebookShare to Pinterest
Labels: art, beauty, beginnings, BS, i too am america, impressiveness