As a teacher, I have to deal with a lot of unusual, uncomfortable things beyond the scope of just teaching the content.

Oh, you'd like to know a few?   There is the unintentional/uncomfortable comedy that happens at assemblies when big girls booty pop on a handstand (toward the end of the page is a description of the popping).  How about yucky kids who come to school deathly ill and dare me not to become sick.  Or the year that there was an epidemic of ringworm, staph, swine flu, shingles, mono all within a 3 month span. 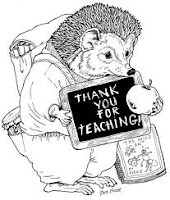 Then there are some of the different discussions I have had to have with kids:


Today, I had to deal with one even worse than the kid I once had who seemed to drink at least five mini-milk cartons (not sure if it was the regular or one of the fancy vanilla, cookies and cream, or strawberry flavors) before first hour each morning.  This doesn't sound bad until you understand that the kid was severely lactose-intolerant.  Severely.

But this was worse because it seems to be getting worse each day and today it manifested itself into the worst nasal discomfort I've had to suffer through in quite some time - literally caused me to choke at one point.

There are kids who congregate out side my classroom during passing time to chill, talk, hack the sack, or sit and relax.  I never really knew if the uncomfortable smell was the students, or the sack, or the smell that came from students' dirty shoes being raised into the air to meet the hacky sack, or what.

Today I figured out that it may just be one of my students.

S/He came into class during the break as I was leaving and the BO was unbearable.  When the class period started and I went back into the room the smell had migrated throughout the whole room.  Of course there were some students who mentioned the smell, but not wanting the student to feel attacked, I told the kids maybe it was a something outside or maybe someone in the art or shop rooms below us was cooking up something.  I then lit some candles - one for my desk and one that I moved to a more central location.

This helped but it was still pretty bad.

I share this not because I am being a mean, horrible teacher and making fun of the kid.

I am seriously concerned and talk with the school nurses when I smell something this rank.  The smell reminds me of first grade when I had a hermit crab that I was supposed to take care of for the class and it died and smelled really, really bad.  If it's not a deodorant issue, there may be more issues with the student's home life that needs to be addressed by the guidance workers in conjunction with the nurses.

As a mandatory reporter, this is, to me, a first step to prevent any problems.
Posted by a.eye

Email ThisBlogThis!Share to TwitterShare to FacebookShare to Pinterest
Labels: aahhhhh, age is more than a number, annoyances, comedy, discussions on race, nablopomo, teaching