Let's step up our communication game together

There are so many things wrong with how people communicate.  I know that I am not the best communicator; I have accepted that, and am working on the things I know I can improve upon.

Part of my improvement is due to the fact that I have been told some of my faults - sometimes directly, sometimes indirectly - and I want to work to be better than I was yesterday.

I guess, we as a society, need to become better at letting people know what is not ok so they know they need to improve.

I have had students who have come to my classes using texting-speech in formal writing.  I am fine if they do this when they take notes, but directly inform them that that is not the way to write in a formal setting.

I have received emails from superiors (especially at my old school) that were so incoherent and full of errors that it really made me lose respect for the person.

Friends have told me that this is not just a problem in education jobs.

The other night at dinner, brother-from-another-mother told tales of having to edit valedictorians' papers in college.  These papers were so horrible that Bio had put so many red marks on the paper that he decided to stop at page two or three because he was starting to feel bad for his friend.

And, rightly so, he was questioning how this person who wrote so poorly could have been a valedictorian.

Bio also had stories of emails he has received at work that were many lines long, but had no punctuation besides commas.  No periods, no semicolons, nothing but commas.  Just a really long, run-on sentence (or perhaps it was more of a marathon-sentence).

Bio's father, a sociology professor, said he has received assignments turned in where college students wrote 'RU' for 'are you' on formal assignments.  I have seen high schoolers write the same way and have let them know that this is not ok.  (By the way, aren't formal essays not supposed to be written in second person?) 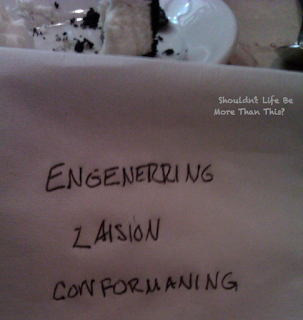 Kid Sis #3 had the kicker for the night.

She said that earlier in the afternoon, someone at her workplace had given a presentation that consisted of repeated grammatical errors on a PowerPoint.  She wrote down, verbatim, what the woman wrote and said in her presentation.  (As you view the picture, also note the remnants of the delicious Oreo cheesecake in the background.)

Bio, #3, and I decided that we might let 'laision' slide since it is a foreign language and may cause a lot of other people difficulty.

Plus, there is so much more that is wrong with this picture.

So many questions:
I know I am not the most perfect writer (I'm sure this post has some errors that I overlooked).  But I am trying.

I'm really going to need people to step up their game when it comes to communication.

And I need people to step up their game to help others know what they can improve with their communication so they don't write like they are texting.

Then maybe they will be 'conformaning' better to their surroundings.
Posted by a.eye

Email ThisBlogThis!Share to TwitterShare to FacebookShare to Pinterest
Labels: annoyances, i wish a mo-fo would, impressiveness, nablopomo