After all my logic and my theory I add a...

I am about to go buy some RPGs, some grenades, some bullet-proof coverings for my house windows and doors, and some serious private security guards.

Because Saint Louis is the 3rd most dangerous city in the world.

It is, according to Urbantitan.

I know I shouldn't take this mess seriously, but come on now.

To compare any US city to the listed international cities and so many more cities where people really do fear for their lives daily is absurd.

I have never gone to sleep with ear plugs in due to the noise of the bombs; I have never had to sleep with night shades over my eyes so that the bright lights of the exploding bombs and missiles don't keep me awake.

I have never had to walk through shrapnel, crumbled buildings, streets filled with tanks, alleys full of soldiers reloading and resting up before the next evenings attacks.

I have never had to adjust where I walk so that I don't have to risk my small child seeing and walking over piles of dead bodies.

I have never had to see (in real life) the disfigured, dismembered bodies of my neighbors or co-workers.

I know that there are people who move out of this city after getting tired of being asked where they went to high school for the one-millionth time.

These people are not considered refugees.

They are leaving on their own volition.

But as I always say - the data is not really that accurate.

Most lists that include StL as the most dangerous in the country (now world) do not count the city as most other areas of the country do.  StL county is not counted as part of StL.  Almost every other area of the nation includes the entire metropolitan area in their city counts.

Not to say that the county is crime free, but they don't have as many violent crimes.  They just have kidnappings, meth labs, cocaine parties, and a ton of other events in recent history that I won't list because some one is bound to think I am making light of the various situations, but please, do your research.

When you do count the city and the county together, the statistics for StL drop enormously.

I'm not going to argue that there are not a lot of crimes in the city, but it definitely does not compare to many other places.  If you watch local news here, there is a constant barrage of crime being shared (though I'm not sure if that is because there is a lot of it, or if it is because that is what local people expect to see on their news channels.  And if you really look at the local news (which I cannot stand, sorry Ms Huda), you could see that most of the crimes are taking place in the same spots of the city.

I am not going to hate on the author of the story for not looking at statistics appropriately.

But I am going to hate on the author for saying that "East St. Louis is the area of nearly 65% of the crime".

EAST ST. LOUIS IS NOT THE SAME CITY AS ST. LOUIS.  It's not even in the same state.  There is a huge (though sometimes not so high with all the drought) river that separates the two cities.  And if you want to get even more technical with it, not all of the area on the east side of the river is East StL.  There are other cities that people tend to lump together that are not actually part of EStL.  Perhaps that is causing that area to have a worse rap than it should.  If you include East Saint in the statistics, then you should include the whole metro area, fo' real.

All in all, the blog sucks.

And now that I think about it, this is what is to blame for some of the students I teach and young people I see around the area. 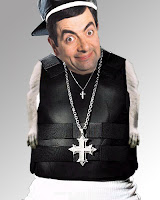 They think they are super hard as shit.

Why shouldn't they even though most of them have never been in a fight, never seen a gun, maybe been detained for MIP of weed, and never had to deal with any large amount of trauma, let alone having a bomb drop on your house in the middle of the night?

And why shouldn't they when each year they hear that their "city" is among the most dangerous in the country?  They all think of the city as the whole metropolitan area.  And they don't watch the news or have classes that teach about what is going on in the world, so I guess according to them (and the author of this blog) they do live in the third most dangerous area of the world.

These people are the reason that I often feel like Lauryn Hill.  Even after all my logic and my theory, I (often want to) add a mother-fucka so you ignant n----s hear me.  Remember. Take notes.