I want to inspire people

Yesterday night, I saw a FB post by a friend about inspiration. 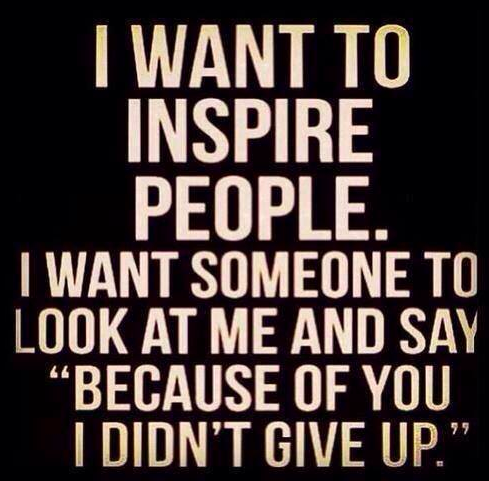 It made me really hope that I can inspire people in my life - students, family, friends, even strangers that I just do random acts of kindness toward.

A few minutes after I saw this and was thinking of how I hope I inspire people, I saw an email notification on my school email.

At first, I was going to ignore it since I don't like to do work emails on the weekend and it was around 11pm on a Friday night.

However, I saw the sender, and it was a student.  I always look at those since there may be something wrong and I want to make sure the students are ok and don't need any help.  It was from a student who has struggled at the school for three years.  Had a child two years ago, didn't do too well last year, and at the start of this year, when she became one of my students, she was skipping school a lot.

The past few months, she has been on top of her game.  She has turned in all of her work, some even early, and is passing the class.  She also took part in the school's first open-mic night that I helped sponsor, and the school's first guitar concert where she played one of my favorite Stevie Wonder songs ("Isn't She Lovely").

Yesterday morning, she came by my room before school and I told her how I had really loved her performance and told her the history of that song and why Stevie Wonder wrote it.  I also told her how much I love that she is doing well in school at this point.

I was shocked to get an email from her so late, so immediately went to read it.

It almost made me cry. 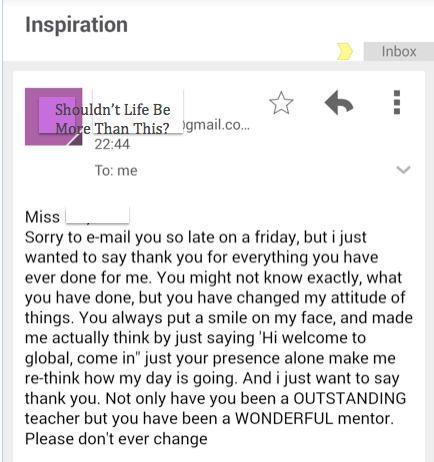 I always try to greet the kids into my class with a smile and a warm welcome to Global or welcome to Social Studies or welcome to room 412 or some other happy welcome greeting.  I don't ever really think about it making a difference, but I do love to see the kids smile back and some of them walk over to my door without a smile, but begin to smile or at least snicker at my giddiness when they see me and hear my greeting.

It is always hard as a teacher to realize when you make a difference in a child's life, but it feels great to know that it is so.

I guess I am an inspiration to some, just as I had hoped I was just a few minutes before seeing this email.

Makes me really love my job - especially in these last days as I have been stressed with end of year Regents Exam preparations.
Posted by a.eye 12 comments:

I have to be at school for zero period (before school class) every day but Friday. It kills me.  I love the class, enjoy the students and the coteachers, but getting up that early and then teaching a full day is tough.  I have literally had days when I want to stay on the subway an extra stop just so I miss mine and may "accidentally" miss the class.

I have also had a day when I suddenly started crying during my walk from the subway to the school because I started thinking about how much I dislike getting to school early and having to still teach a full load of classes and than have teacher meetings or an additional (mandatory) student help session at the end of the day.

Today, was a day the students took a Regents exam so there was no zero period day.

Words cannot express my joy knowing that today I did not have to get up early to teach that class!

I got to sleep a little later, eat breakfast, leave for work with my boif, and just be relaxed in the morning.

One benefit of getting to school for zero period is that I am always the first person to get to one of the two copy machines for teacher use.  I can copy to my hearts content until it is time to get to class.

Because I knew that today was a late arrival day for me, I made all my copies yesterday. However, after grading a class's work last night, I decided that I wanted to print their progress reports so they could see their current grades.  (Yes, NYC is still in school and won't be finished until June 26 - that is not a typo.  June 26)

I got to school 20 minutes before school started (instead of an hour and a half early like zero period days) and went to the copy room to print my 26 single-sided copies.

When I got there, both machines were in use and one teacher was almost finished with one of the machines.

Before I could print my items, the teacher that was on the machine what was nowhere near finished said that she was about to start copying a shit-load of stuff on the other machine, too.

I almost screamed at her.  How can you use BOTH machines in the copy room?  I asked her fairly calmly, but in my head I was screaming.  This made absolutely no sense to me.

There are two copiers for 30+ staff.  You can't gank both of them to make your last minute copies to do something you have known about for over a week.  You also shouldn't be making hundreds of copies early in the morning that you need them anyway -- copiers jam and you may not get what you are trying to get copied.

I'm just saying.  That's what preps and lunch and after school are for.

She said that since she got to school earlier, she had the right to take up both machines.

I said that I also had the right to get ready for my first period class and to be able to print 26 pages.

She said something jokingly to me and pushed my head a bit. I'm not sure what she said because I not only was pissed about the copies, but also don't like my head being touched, let alone pushed - and, I'm a strong son-of-a-gun, but this one does not know her strength.  I restrained myself from putting a hand on her - it was still before 8:15am, and I like getting paid for work.

She allowed me to get in on one of the machines after a little while and I finally got to print my reports before the start of the day, but was still kind of pissed about the whole situation.

Not a good start to my Tuesday.

I tried to go back to this motto about good ish and breathe easy.

Getting my replacement ink cartridge in the mail today makes it easier to breathe it all out since I will be able to make more copies at home again.

And it is only Tuesday, despite my thinking it feels as though at least half a week has passed since Sunday and that it could be Thursday...
Posted by a.eye 4 comments: