The most interesting man in the world 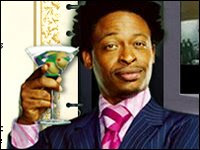 This guy rivals Tony Sinclair from the Tanqueray commercials.

If not music, would they tolerate slavery?

We have stopped the bop. But there is now some controversy over whether all of the money was actually raised.

During the three days of music between classes and before and after school, there were many people who complained about having to hear the song over and over each passing period. There were also students who really enjoyed the song and said they would not give money because they wanted to still hear the song. It was annoying but I could handle it. I am grown. And I like to play some music when the kids are doing independent work or group work to mask some of the conversations of others so I could hear something else to get that mmm-bop out of my head.

There are some teachers here who cannot seem to handle a little bit of light-hearted fun in order to raise money for the local children's hospital.

There were teachers who taped pillows to the speakers in their rooms.

There was even a teacher who unscrewed and disconnected the speakers from his wall.

I remind you that it only plays for the 6 minutes between classes, for only about 5 minutes before the first class begins, and long enough for the song to play one full time after school.

It is said that parents called in complaining about the music. It is said that the SSD teachers complained that their students had the song stuck in their heads throughout their classes. (Because the students who rush to put on their iPods between classes as they walk to their next class, wouldn't have songs stuck in their head all hour -- songs that may be inappropriate or may lead to them repeating the cuss words accidentally-on-purpose during class).

Either way the school this morning stopped playing Hanson.

At lunch a fellow teacher told about a fund raiser that went on in the Troy area until 1996. Until 1995 they called it a Slave Auction.

One student could buy another student and for a day the bought student was to do anything the other student wanted him/her to do. They followed the student around and had to carry books, clean up messes, etc for the day. They raised thousands of dollars each year with this. Each kid would go for hundreds of dollars.

In 1996, I guess someone realized that this might have a bad connotation, so they changed the name, but still had the auction.

That year a male student on the auction block had just broken up with a girl. That girl had started dating some one new. The new boy bought the old boyfriend and on the slave-day had the boy follow him outside and proceeded to beat the old boy, sorry to say it, but, like a slave.

Since then, they have not had the auction. I guess that the history of slavery in this nation and the idea of enslaving a person was ok. It raised the school tons of money just as it raised the slave catchers, masters, and traders a ton of money. But when one kid gets beat up, that was too much.
Posted by a.eye 2 comments:

Do we need to go back to kindergarten pie charts?

People can't figure out what it means when the weather people say there is a 20% chance of rain.

Some people honestly think that means that it will only rain over 20% of the news' viewing area.

On a mission to make that money

I guess that people think that the more annoying they are the more you will give in to them. Not only am I having to listen to the annoying interruptions of my NPR shows on the radio, but also something even worse at school.

I don't know who thought of this idea, but the Key Club is trying to raise money. Not sure for what. Their technique is going to really kill me.

They are playing a song each day on repeat before school, between classes, after school, and I think they are going to try and find a way to do it during lunch as well. They will continue this process until their monetary goal is reached.

I guess this stuff works. I always give money to the station to get them to shut up and get back to my regular programming. And I am going to bring cash to school to help this song end.

I think that I am going to embark on a similar plan at the school until the superintendent and the school board raise either my personal pay or the salary scale to meet my desires.

I have a few options I am pondering:
Not sure which one will lead to more money for me.

I'll think about it.
Posted by a.eye 2 comments: