Every morning I have to go through this

There is really nothing like teaching in a classroom with a small window in the winter time. Because then, when a student comes into class every day with some gastrointestinal problems, there is nowhere for the air to go.

And every day, I try to be the mature one and not make a big deal about it.

Tomorrow I don't know if I can take the higher ground.
Posted by a.eye 2 comments:

A brief rehashing of the New York Post image

Briefly while I take a short break during Lost.

I think that there are some ways that the New York Post article could be misunderstood if the artist's intention was not to be construed as a racial image. I guess they are trying to associate it with some of the primate issues that were going on this past week.

However, there is SO much history behind the connotation of an ape-like creature and African Americans.

It all seems kind of fishy to me.

Back to confusing myself with Lost.
Posted by a.eye 5 comments:

So why is someone still making cartoons of black people represented by monkeys?

This is from the New York Post this week. 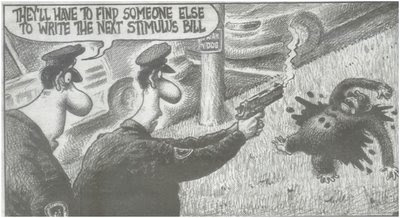 Rev. Sharpton briefly wrote about it. If it weren't the end of school and I didn't have to go do pre-season track workouts with the kids, I'd write more.
Posted by a.eye No comments:

I have not been able to write as often as I would like.

Here is a guest writer -- Kid Sis #2. She wrote these fine words. I cannot agree more.

“This boy is beautiful! His skin is so fair! I hope his skin never gets darker, he is so cute.” These words, spoken by family members about my son yesterday, were supposed to be compliments. However, I was reminded of how, to many, light skin is synonymous with beauty. The more I think about the comments, and the number of times something similar has been said about my son, the angrier I get.

A few years ago I was at Mizzou and had my hair in braids, with extensions. A young man started talking to me, telling me that I shouldn’t wear extensions in my hair; he told me that I should embrace the “natural me,” the way that women in Africa do. At the time I was annoyed, because I had actually gotten the braids in Nigeria, where most women wear braids or weave of some kind. Now, however, his words are ironic; because the African women who many Americans think embrace their natural beauty actually have some of the unhealthiest attitudes of beauty. In reality, the only people who have ever criticized my natural hair are Nigerian women. The women who see me with an afro for the thirteenth time, who ask me for the thirteenth time with disdain if I can comb my hair, are all Nigerian. The only people who ask my modelesque sister with her beautifully shaved head “what did you do to your hair?” are Nigerian women. The only people I know who use bleaching cream to lighten their skin are Nigerian women.

This is not to say that Black American women all embrace natural hair and dark skin. But in no other culture that I know is the standard of beauty so far from the people themselves. At the African store yesterday, I noticed that the entire counter under the cash registers had a variety of bleaching creams, many containing steroids which run the risk of damaging the skin if used improperly. My husband noted this morning that one aunty of ours has the characteristic look of someone who has used bleaching cream for too long. Obviously she is not the first person who has damaged her face; yet the creams are still being used widely.

Here in the United States we make jokes about people who are too dark, and many of my light friends admittedly avoid the sun to stay light. I even know of a young man who placed a towel on his left arm when driving so that the sun would not darken it. But, again, the standard of light skin equaling beauty is not as ingrained as in the Nigerian born women that I know.
My son, born in 2008, will always live in an America that could elect a Black man, an African, to the presidency. However, he remains in a world where many of his people hate the beauty that God gave us. We all have white friends who tan until they are darker than many Black people; why do they love our skin more than we do? Our color palate is the most diverse of any race, and every shade is beautiful; so why do some praise only one part of the spectrum?
God gave us hair which can be straight, curly, wavy, or a kinky Angela Davis fro. Some of you may remember in junior high I did a project on an imaginary invention, the Automatic Hair Changer. I wanted white hair so badly, and my invention promised to create silk smooth hair, “thick and full of body”. Fortunately I now appreciate all Black hair, both relaxed and natural. But are my children going to hate their natural curls? Are they going to internalize the message that is sent to them when people compliment their fair skin, and tell them not to let it get darker?

The harsh reality is that no matter what values I instill in my children, others around them will continue to pass on their ancient ideas of what defines beauty. This has been a very sobering wake up call. In 2009.

Tricks aren't for kids... or teachers

I'm sure there are a lot of teachers who feel like they don't have enough money to make it. Thankfully I can budget and don't try to live like all the Jones' and Shaniqua's who are deeply in debt and getting their homes forclosed on.

There is a lady-teacher in Ohio who apparently really needed some extra money on the side. Either that or she is a sex addict.

She left the elementary school she works at during school hours in order to meet up with a guy she had hooked up with online so that she could perform her prostitute activities.

I wonder what she told the kids in her class, "Kids, I'm going to leave while you are at gym and recess. I have to go see my John." "Is that your son, Ms Carter?" "No, Sweetie. My John is one that I make happy. And then he gives me money." "Kind of like my parent's giving me allowance?" "Almost, only you shouldn't let your parents do the things I do to my John to you. And you shouldn't do them to your parents." "But I want to make them happy, Ms Carter." "I can't keep talking to you about this right now, son. Time is money. And you are wasting mine. Have fun at recess."

I don't think so buddy.
Posted by a.eye 1 comment:

Shout out: Kyle Beachy, The Slide

Shout out to my high school classmate, Kyle Beachy for his debut novel, The Slide.

Beachy is on the cover of the Riverfront Times this week.

If you are in St. Louis, he is in town as part of his book tour and you can meet and greet and have some good drinks at a great bar in town owned by his really good friend, and another high school classmate at the Gramophone off Manchester.

And check out the book, The Slide, which is getting some awesome reviews by the press.

You can also read another of many interviews of Kyle here at Largehearted Boy. This one is cool because it ties in music to his thinking and writing as he creates a playlist for his book. It also has a lot of links related to him and his book at the end of the article.
Posted by a.eye 1 comment:

This is how I often feel as a Nigerian American.