I can't find a better video quality, but this is hilarious.

Check out his hang-time.
Posted by a.eye No comments:

Sent to me from my brother.  Lionel Richie always tickles me. 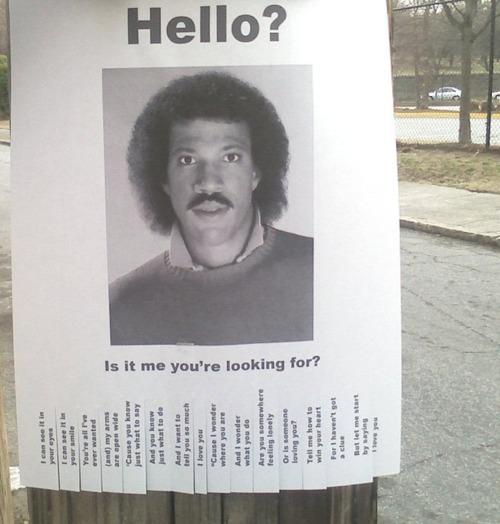 There's nothing to bring you into reality like some sort of major scares.


These were/are all scary for different reasons and to different intensity levels.

Thursday I experienced a new kind of scare.

After school, I went to practice (yes, track is back in session - I am back being sore demonstrating drills and trying to pretend in front of the kids that it doesn't hurt and is still easy for my ever-aging body, and I will soon be losing most of my free Saturday time).  Before practice, I decided to wipe down my dirty computer keyboard area.

When I came back in, I had to clean up and get ready for three hours of parent-teacher conferences.  Then I packed up and headed down to meet, greet, share information.

At various times during these conferences, there are lulls where I can either sit and stare out the door (I was seated RIGHT in front of the entry door.  Not sure if this was some sort of social justice move to let parents know that yes, there are some black women we hire as teachers, or just a coincidence), grade papers (which I had none on this second night), walk and talk with other teachers who are not meeting with parents, get a snack of pita chips and cheese (which would not turn out well for me or the parents), or I can get on my personal laptop and cruise through some of my favorite safe for work sites.

I pulled out the laptop and turned it on.

The light came on, but it took a while for the login screen to appear.  When it did appear, my keys were not typing anything.  I restarted it and then it did not come on at all.

It was dead or broken or about to implode or something.

I wanted to scream for fear of all the data I had put on in the past two weeks that I had not yet put onto a jump drive or my Time Machine.  I wanted to get up and make a bunch of phone calls to see what could be done.

Instead I had to sit there for another 2 hours talking to parents (mostly about how well their student is doing since the parents who need to kick their kids into shape are often the ones who cannot make it for various work, school, a lot of other kids, not really paying attention/caring reasons - maybe they haven't heard of the proposed jail time and conferences issue in Detroit).

I had way more pressing issues.

That night and into yesterday morning the computer would still not turn on.

I had to go to the dreaded Apple Store.  First, that meant I had to go into the mall.  In itself a scary time, but I was hoping that since I would be in there around 1 on a weekday that it wouldn't be too bad.  Then there is the Apple Store itself.  Fun gadgets to play with, but too many people - many of them crazed gadget-hounds who think life revolves around their desire to acquire/fix whatever Apple devise they currently are servicing.  I braved the lunch crowds, but would have to come back at 4:45 because there were too many people and I had to leave for practice.

Later came back and got to look at all the cool new computers with amazing mouse pads.  They said that everything on my hard drive could be saved.  Then one of the nice workers said that I was still under a warranty and that might cover fixing the power button.  (I guess when I got the computer three years ago I must have done the normally unthinkable for me and purchased an awesome extended warranty)

The computer is fixed.  Even have a new casing that they replaced, new keyboard, and new mouse pad.

I still have all of my information.  I don't have to spend over a thousand dollars American on a new computer.  And I can now stay out of the mall for a while longer.
Posted by a.eye 4 comments: