I am afraid of few things in my life. Yesterday I tackled one of those few. Ever since I was a little kid I have not wanted to go back into the St. Louis Arch monument. There was something about the rickety-ness of the little container that takes you up the sides, the size of the little thing that takes you up, and the little chairs in the container that made me at the age of about 8 not want to go back in there. Hearing about malfunctions in it last year just reemphasized my lack of desire to go in the contraption, get stuck, have no cell phone service, and be in there in the dark indefinitely until someone figured out how to work the 1960s technology and get me out of there.

But, I went yesterday. Seeing the monument up close is really amazing. People always talk about being a tourist in your own town, but I have not seen a lot of the big name things in this city in the longest time. 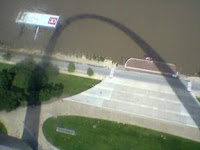 It was cool standing next to it, seeing it in all of it's 192m of glory (that's about 630' for you non-track/non Euro measuring people). In my heyday, I could have ran from the ground to it's peak in about 23-24 seconds.

The ride up was not nearly as bad as I remember it being when I was young. It was actually really cool watching the walls, and the bolts, and the stairs go by as I timed how long it took to go up and down the shoot (I believe it was around 4 minutes both ways). Being at the top was really quite mesmerizing. The views, the tiny people, the thought of someone leaning too hard on the window, breaking it and falling out -- all were entertaining. You can see a picture I took here -- you can see part of the road that was flooded. They blocked off much of the landing area due to flooding waters. The guy me and Kid Sis #2 took to see it was amazed by the flooding since he had just been on the road four days prior. We had to try and describe how much worse the Flood of '93 was with regard to water levels.

Less entertaining was the ride down where we shared the container with three people who reeked of booze. The first thing the woman said to me was, "You don't mind if I throw up, do you?" Um... yea I do. I ended up sitting across from her and was not looking forward to the projectile vomit I was imagining coming out of her mouth. I was also not amused by her constant chatter about the lack of oxygen in the container and her fear of the thing falling down and skeetering to the bottom. But we made it back to the bottom in one piece. And I never have to hear/smell that woman again.

Back in February, I felt a lump in my breast. Strange, yes, but I had always felt something in there that when shown to the doctor was told was muscle tissue. Seeing as this one felt different than those other ones, and I don't have as much muscle mass as I used to, I was a bit worried about this mass. When I went for my annual gyn visit in March, I showed the doctor. At first he did not feel it. But finally he did and suddenly his demeanor changed. He said he does not hesitate with breasts.

I was scheduled for an ultrasound two weeks later. I have always loved watching surgeries on tv and reading the latest in doctoring in magazines and online. So, it was strange how it was a bit exciting, and yet totally frightening to see the mass on the ultrasound tv screen right next to my head. It all made this thing so real. Immediately after the excitement of seeing it and figuring out how big it was faded, the thoughts of breast cancer shot into my head. Followed by the thoughts of possible death -- not being there for my family and loved ones. Following these thoughts, I moved to the people I have known with breast cancer and how they have all survived with different treatments.

Then the real kicker. It was still April, then, so I wasn't completely sure that I was going to quit my job, but I was considering it.

The next fear that came into my head was the first truly adult fear that I have had in my life -- insurance. If I quit my job without a back up, I would have no insurance coverage to take care of whatever problem I may have. No insurance meant that I would have to really get into Eastern medicine and figure out what to do to help myself without doctors.

The ultrasound doctor did not seem very urgent about my situation, but when my doctor saw the ultrasound, he wanted to send me to the St. Louis Cancer and Breast Institute for another opinion.

That appointment did not come until last week. Waiting, wondering. All while trying not to touch the mass in my breast since the nurse at the ultrasound place said that manipulating it could possibly do more harm than good.

The doctor quickly took a feel of my breast and then told me that she did not think that it was a tumor, that instead she thought it was a fibroadenoma. She said that there were three options:
I went with the third option.

Had the biopsy on Tuesday morning. A really neat procedure. All the obscure surgeries I have seen on television, but I had never seen a biopsy done. I just wish I could have had a better view of my chest as it was being cut open. The incision was small and because of the location of it, I could not see it very well. When they excised two samples of the tissue, they implanted next to the mass a super tiny stainless steel breast cancer symbol so future doctors will know that the mass has been examined by a doctor. It seemed to be about the size of the top of a hair brush bristle.

It was kind of strange how the Oprah show replayed the episode about death on Tuesday after I had the biopsy done, but before I had the results. Randy Pausch was on there giving his last lecture he had given at Carnegie Mellon. He is a man who has pancreatic cancer and does not know how much longer he has to live. His speech was really touching and focused on living rather than on dying. Very motivational even for those who are not facing death.

Yesterday I found out I am officially hired by my new school. Immediately after that call, I got a call from the Cancer Institute. The lump was benign. I am ok. I have to go back in December for another ultrasound to check on its status.

I did not think I could overcome the fear of death, but when I thought the conditions were there, I was ready to face it and do what I had to do to either deal with it or challenge it.

I am not afraid to die. I have over come that fear.

I am afraid that I won't live enough. But that fear can be appeased by choosing to live every day. A simple step.
Posted by a.eye