I somehow forgot to write about my time at the school retreat last week.

Awesome group of people who seem to truly care about the students.  They also worked at team building with the staff members.

One of the activities we did was so freaking awesome, that I had to take pictures and send them to people, and now share with you.

We did an Iron Chef competition in the PROFESSIONAL kitchen of the hotel where we stayed.

We first were prepped with information of how it would work, then we had to scrub down doctor-style all the way up to the elbows.

We received chef's hats and shirts (just like on tv, though I didn't have the opportunity to write my name onto it since I didn't want to make my hands unsanitary).

We were then divided into three groups and taken to the AMAZING kitchen.

There was a large table full of proteins (shrimp, sausage, beef, pork, chicken, mussels), and another table with various fruits, veggies, side dishes, etc.  Another table had a ton of seasoning items, and there was also a 3" bin of each salt, sugar, and pepper.

My group chose me as the team leader and we started trying to decide what to make.  We decided on a shrimp appetizer of coconut shrimp (I made) and sweet and sour teriyaki shrimp.  Our main dish was a linguine with wine sauce of mussels.

We had to have a plate for the three judges and also make enough for the thirty+ teachers.

What we made was going to be dinner for the night, so it had to be good.

Here are images of my teams final dishes: 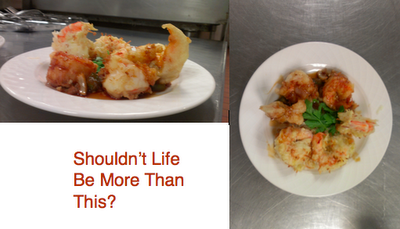 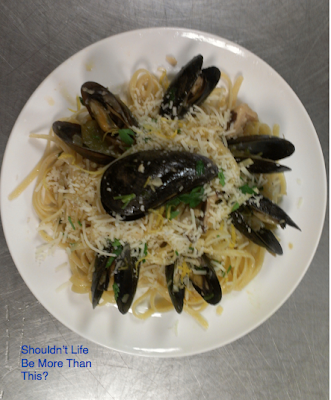 I hope to be able to work in a real kitchen again some day.  So much easier than in a home kitchen - everything you could need is right there.  Didn't hurt to have pro chefs there to help out with quick questions and to gather supplies we needed from the back rooms either.  Also didn't hurt that we didn't have to wash any of the numerous dishes we messed.