I have internet and cable in my apartment!!! 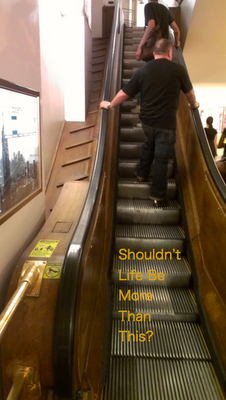 I have still been wandering the city, running errands, and sometimes, just wandering just to be wandering.

The other day I went into the downtown Macy's.

They has wooden escalators.  The actual steps used to be made of wood, as well, but now they are metal.

All the escalators in the 9 1/2 story building (the half story houses some of the men's items) are like this.

While walking downtown, I also saw a little lapdog wearing sunglasses and a four-five year old boy still drinking from a baby bottle.

I have seen a man get hit by a car on a street corner.  I have been asked for money by an innumerable amount of people.  I have witnessed two block parties in Harlem.

I have eaten breakfast for dinner three times and have also managed to eat frozen yogurt from 16 Handles as a meal twice.

So far, I am adjusting to the City.

I have a retreat for the new teaching job I have secured starting on Wednesday through Friday and then start actual work on Tuesday if I can get all of my paperwork sent in from the Departments of Education of Missouri and New York.

Keeping my fingers crossed on that one.
Posted by a.eye