This is the last installation of July photo-a-day.  I used prompts from Fat Mum Slim's website. 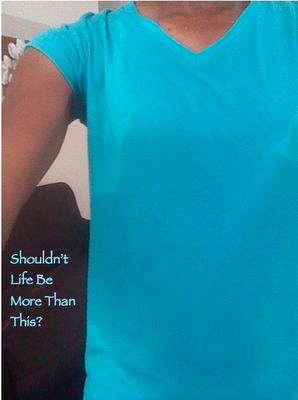 25. Heart - The things I go through to try and help my body heal from the bad things I do to it.  If you look closely, you can see that my shirt is two different shades of blue.  The darker color is from all the sweat by body released during a run/walk session in the morning.  It was finished before 9 am, but was already 87 degrees.  If you look even more closely, you will see that I am developing a serious v-neck and partial farmers-arm tan. 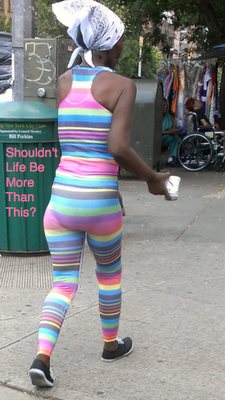 26. Sunshine - This 60-70 something year-old ladies' outfit was really a ray of brightness and internal giggles for me as I walked through Harlem.  I had to slow my walk so that I could get behind her and conspicuously take a photo.  Wow!!  It was not only spandex-like, but also fairly translucent.  Wow!! 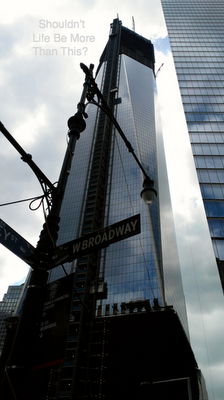 27. On the road - I could see the new World Trade Center building even when I flew over the city of New York.  Last time I was in town, it was nothing but a whole.  Now it is a really large building.  I think it is now the tallest building in NYC.  When it is complete, it's glass walls will be seen all throughout the city. 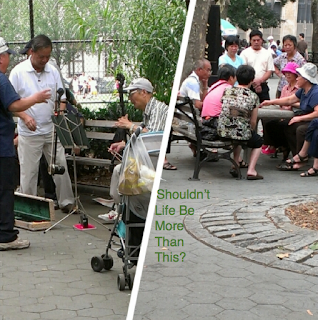 28. Cup - I made it to Chinatown in NYC during one of my solo wandering adventures.  I really liked it, especially after I got off of the main tourist streets.  I wandered through different areas and neighborhoods and, in one area, I found this park.  It was full of Chinese people speaking their languages, playing card and board games, chatting, biking, as well as small groups singing and playing instruments.  Somehow, hearing nothing but foreign languages was relaxing and made me feel at home.   In the pictures, the group on the right was playing some kind of card game and it seemed to get intense as two people started pointing and talking to the people on the other side of the table.  The men on the left were playing a version of "The Star-spangled Banner" with their Chinese string instruments.  It was different than anything I have heard and it was lovely.  I sat back on a rock and did a lot of people watching while sipping water from my canister/cup.  I would have stayed longer if there weren't birds shitting all over the place.  I have not quite over come that fear. 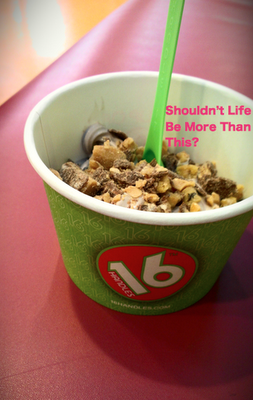 29. Last thing you bought - While in NYC for a week, I stopped at 16 Handles for ice cream at least four times.  I loved it each and every time.  This was my cookies and cream creation with Heath Bars and a little dash of cookie dough mixed in.  So good.  Kid Sis #1 even got me layering the toppings so it is easier to have them all throughout.  I put a little bit of topping, ice cream, more topping, more ice cream, and then finish off with another layer of toppings. 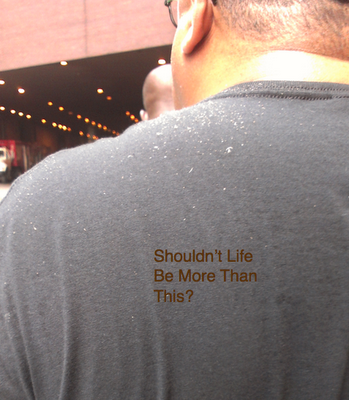 30. Calm - As I waited in line for the Mega Bus to DC from NYC, I tried to remain calm in the hope that I would not have to sit to the left of this man's dandruff-ridden self.  I've never seen a person with so much dandruff flaked off onto their shirt.  The bus ride worked out, and I had a pleasant trip sitting next to people who did not make it snow all over me. 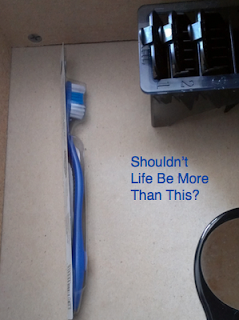 31. Toothbrush - I always keep a spare toothbrush in the drawer.

You can see the images I took in the first, second, and third weeks of July, too.
Posted by a.eye

Email ThisBlogThis!Share to TwitterShare to FacebookShare to Pinterest
Labels: annoyances, beautiful people, crazy people, discussions on race, i wish a mo-fo would, impressiveness, its too early for all this, photo-a-day, play, war