After working at my last school, I was upset that I lived 23-27 minutes away from the new location instead of the 10-15 minutes from the last school.

I don't like the commute, but I know that a lot of people in other cities deal with longer drives to and from work, or even throughout the city.

Today, it snowed a bit during the middle of the night.  First snow of the winter.  I looked out the window when I woke up and didn't think much of it.  It was just a dusting, with some good wind.  I didn't even check on the telly to see if there were school cancellations because it was really not very bad outside.

Even so, I still left ten minutes earlier than normal because I know that when it rains or snows people forget how to drive.

I didn't expect what was out there.

It took me 40 minutes to drive a route that normally takes six minutes.  At this point, I really wanted to turn around and go home, but there was no way to get off the highway and there was just as much traffic on the other side of the median.  It was bumper to bumper.  I was starting to get the manual transmission-shaky-leg from being in stop and go traffic for so long.  I got off the highway, but even that was a mess.  There was a BMW on the off ramp that was doing nothing but spinning its tires trying to get up the hill.  I spun a bit, but gained grip and was able to move on. 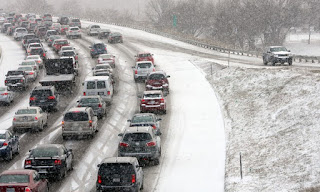 At this point I heard on the radio that EVERY SINGLE highway in the Lou had major accidents or portions completely closed to traffic.

Traffic on the roads was bad, too.

All in all it took me an hour and thirty-three minutes to get to work.

Even with the stress of turning down semi-random streets to avoid traffic and to avoid accidents I could see up ahead, I was able to stay calm the entire ride.  There were people in cars that I could see were visibly upset and disturbed.

I just kept breathing and kept focused on the road.

Despite all the time it took to drive to work, I was really just grateful to make it safely.

And when I finally got to work, I found out that the after school supervision I had signed up for was cancelled.

I had time to do something I have not done yet this year - grocery shop.

Unfortunately, I feared it will probably be ridiculous in there since when it snows people seem to think that the apocalypse is arriving and they MUST BUY ALL FOOD.

I just needed the basics, but I knew I must deal with the crazies trying to stock up on bread, canned veggies, and for some reason, fresh broccoli (not sure what these people think they will make with these items, but they are always gone in inclement weather).

Hopefully the roads are better tomorrow.
Posted by a.eye

Email ThisBlogThis!Share to TwitterShare to FacebookShare to Pinterest
Labels: annoyances, fear, its too early for all this, nablopomo