Yesterday while waiting for my oil change and watching two partial and two whole episodes of "Father Knows Best" in the waiting room, I had some interesting people-watching.

Waiting for things I know will take long is much easier than waiting and not knowing what I am waiting for.

There was a woman sitting in the room along with me.  At first she was texting or doing something on her phone.  Then she started reading a thick book.

Then she put that down, took off her scarf and the fun began. 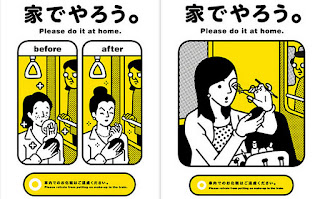 She had three large bags with her and took a bottle out of one of them.  I recognized it as foundation.  She poured some onto her hands and started spreading it on her face.  I was intrigued.  She then continued (without washing or wiping her hands) to reach into her bag and take out some various shadows for her eyes.  She used four different colors in the pink and purple families to get a smokey-eye effect.  There were about two different eyeliners, as well.  It looked pretty good.  She moved on to lipstick/stain and then a lip gloss to add just the right amount of shine and stickiness.  Next came some sort of finishing powder on her face, though more of it seemed to land on her blouse, stomach, and lap than on her face.

She put a shiny jeweled necklace on her neck, rewrapped the scarf and pulled out one of those sticky-paper lint rollers out of one of her bags.  She started on her lap, moved to her chest, removed a sheet, stood up, and redid the process adding her back and the back of her tights to the mix as well.

The finished product was decent and she only caught me watching her twice.

My issue is the same one I have when I see people wearing their hair in a wrap-style, rollers, house shoes, pajama pants, and the like out of the house.

I understand that there are times when you don't feel like getting all done up to go to run some errands, but shouldn't you not look like crap?  And shouldn't you not do your fixing up out in public?  I can almost allow reapplying lipstick or lipgloss in public, but the rest, I don't think, should be done for all to see.

I know it wasn't as bad as these situations, but I don't like germs or the possibility of sharing body goo in any form.  I know they have a bathroom in the shop with a really nice, large mirror, so she could have easily gone in there.  Then she would have also been able to wash all the foundation and face germs off of her hands before she continued to touch things in the waiting area.
Posted by a.eye

Email ThisBlogThis!Share to TwitterShare to FacebookShare to Pinterest
Labels: aahhhhh, annoyances, i wish a mo-fo would, impressiveness, nablopomo