This past week, was great at school.

Rather than teaching traditional classes leading up to the winter break, each teacher had the opportunity to teach about anything we wanted for the entire week.  We had 14 (up to 28 if you paired with another teacher) students in our class the entire day and were able to take field trips and have guest speakers come in.  Students were placed into one of their top five choices.

I chose to do spoken word poetry with a teaching partner - we called it "Tell it like it is!".

It was great.  We were able to show various spoken word poets from a range of topics, from a range of people with a range of ages.  We taught them about rhyme, rhythm, repetition, and lists.  We discussed misogyny and how it connects to young women and men's identity in this time period of violent, sexist hip hop.  We were able to go to the Tribeca Film Institute and view a film on this topic on Tuesday.

We regularly gave them prompts and had them grow those prompts into poems.  Another field trip was to Washington Square Park to people watch and grow what they saw into stories that could become poems. 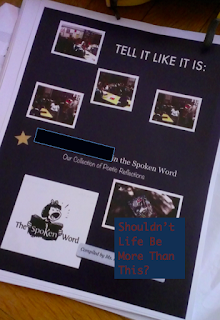 We practiced presentation and the art of spoken word.  We demonstrated the difference between a poem and a performance piece; the students practiced and practiced and became better and better with their performances.

Our group culminated with 30-minutes of spoken word performances and a 65-page anthology of their work in the categories of identity, friendship, love, the real word, and freestyle.

Their work was great!  Their performances were great!

It was a really rewarding week - though I don't think I would stretch it to more than a week.  And, I feel even more for teachers of elementary school who have the same students all day long.  Though we didn't get breaks for art, PE, music, or anything else; it was us and the kids.  All. Day. Long.

But, me and my teaching partner want to do it again next year.  I suggested a school-wide poetry slam later in the school year, and we are going to try and make that happen, too.

I have been loving this week and it was on my mind, so I didn't go off of the prompt about Christmas shopping - I don't buy gifts for anyone anymore - I like to get people things throughout the year instead of on a designated day.  This was my 5-minute Stream of Consciousness Sunday post.

You can link up with Jana's Thinking Place and see other posts or share your five-minute brain dump of free writing with no editing (though I took time to link up to earlier posts on this topic from this week and add the picture).