I remember one year when we were in Nigeria, there was a man who kept screaming outside.  "I!  Scream!"  I wanted to yell at him that I can scream, too, but eventually realized that he was just saying ice cream with a lot of space between the syllables in a way that was not conducive to people knowing what he was saying. 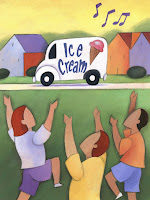 When I was younger, we would have dance practices at my parents place.  There would be about 30 kids there on several Saturdays during the summer.  It was great!  One ice cream truck driver happened to stop at the house one day and saw dollar signs.  He continued to come each Saturday.  I actually felt bad for him after we were done with our performance and he came to an empty driveway.

Despite my body's often rejection of it, I have found brands that work with me rather than against me and flavors that are deee-lish!


The sound of ice cream truck music has come to not be as ubiquitous as it was in my childhood during the summer.  When I do hear it, I still look out the window to see if is really coming.

Yesterday, I heard the noise and looked out the window to see the truck posted up about 100 meters from my place.  It was just sitting there, as though waiting for people to come through and get their pick of ice cream.

It stayed there, blasting its music for over 20 minutes.

I like the sound of ice cream trucks and the memories it brings, but this was ridiculous.

I kept looking out the window to see if anyone showed up to purchase some yummy, tasty, frozen treats.  It wasn't until about 10 minutes into the stake out that a customer showed up.  Then it was another five minutes before more people went to the truck.

After 20 minutes, it finally drove slowly up the street.  I had peace and quiet.

Until about seven minutes later when it came back through the area and waited another five minutes at a corner close to the original spot.

It's great that an ice cream truck comes through the area, but I hope this isn't a summer tradition in my new living location.
Posted by a.eye