Here is week three of my June Photo-A-Day Challenge hosted by Fat Mum Slim.  Each day I took a photo related to the key word for the day. 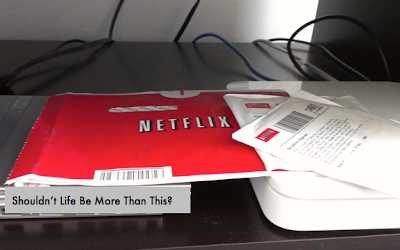 14. Time - There was a time when I watched movies so much that I was sending them back to Netflix one or two days after getting them in the mail.  I was streaming them regularly, too.  Times have changed.  These two movies have been collecting dust behind the gaming system and Time Machine.  I actually moved them forward just for this picture.  I have had these two movies since September.  Time has flown by and I have still not watched the films.  I couldn't even remember what they were until today when I read the information about them.  They do sound interesting, but I still don't know that I will watch them anytime soon.

15. Yellow - When I learned about the Civil Rights Movement of the US that happened in the 1950s and 60s I always was disturbed and intrigued by the sit-ins of Greensboro, NC that led to the desegregation of Woolworth's eating counter, as well as other institutions in the US.  I knew that the building on Grand in St. Louis used to be a segregated Woolworth's.  Still has the same look on the outside.  The other day, I decided to jog/walk past the building and saw that this yellow and red engraving is still on the ground outside of each of the entrance doors - I had to take a picture.  I love that the city has kept this on the ground.  And I'm glad that, although there is still not full equality for everyone, there is no more segregation in public buildings. 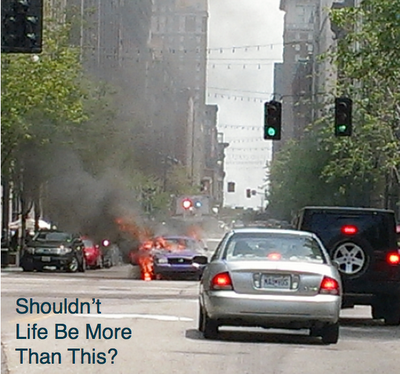 16. Out and about - I hate being behind cars that are driving slow and now knowing the reason for the traffic.  On this day, I was driving behind slow cars and realized that a burning car was the reason for the hold up.  Of course, the first thing I thought was, "I need to take a picture of this!"  I wasn't alone.  After I took my picture, I looked around to see if people were staring at me and realized that there were 20+ people on the sidewalks and in the street and in their cars taking photos and making videos.  I turned off of the street at the light after seeing the fire trucks and police cars arrive to help the vehicle (which had no driver in it).  I guess it all worked out because on the way back a few hours later, there was no sign of the car, and no evidence that this event had occurred. 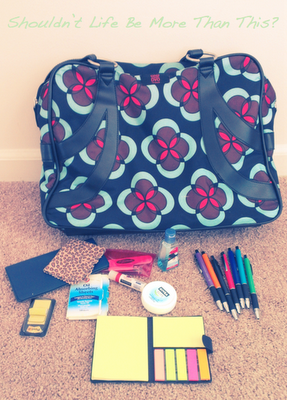 17. In your bag - I don't regularly use a purse.  I prefer small metal wallets, or my newer leather case-thing that can fit my cards, my money, and my slim cell phone all while fitting in the back pocket of my jeans.  I am going to give you a look inside my school/work bag.  It has all the basics.  I love my bag.  I love the design and that I have not seen anyone with the same style.  Items from left to right: 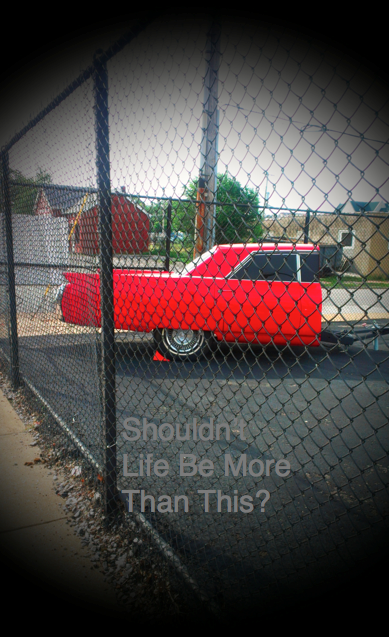 18. Something we don't know about you - I don't like older model American cars.  (Or the newer ones made to look like the old hoopties.)  I think they were way too long and I still don't understand how people drive them and turn without making super-wide truck-like turns.  I much prefer smaller cars that can easily fit in parking spaces and that you can reach the items in the backseat easily if necessary.  It tickles me each time I drive past this old car on a body shop lot.  I thought it was being fixed, but it is actually a show piece for some reason.  It was once huge, but is now been cut in half to make it the perfect size for a car... if only they could put a steering wheel and an engine into it somehow without making it longer. 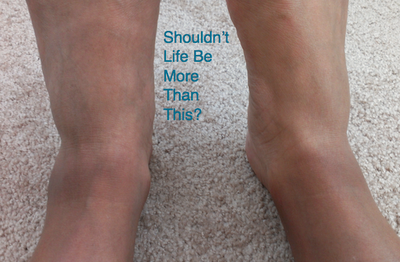 19. Imperfect - The siblings and I have always joked about our inability to tan our feet.  It is really quite an annoyance.  There was literally a time when I was standing behind a screen and all that could be seen were my feet in sandals.  When I came out, a person told me that they thought I was white based on my feet.  I have tried everything, including a spray tan.  Nothing has worked.  I guess I will just be left with imperfectly pale feet and a pale torso.  Fortunately for all of you who don't look at computer screens with sunglasses, the contrast of my feet didn't come out as much as they do in reality.  If you look closely at the top of my left foot, you can see the makings of a slight sandal tan line. This is likely as dark as my feet will get this summer.  At least they don't blend in with the carpet. 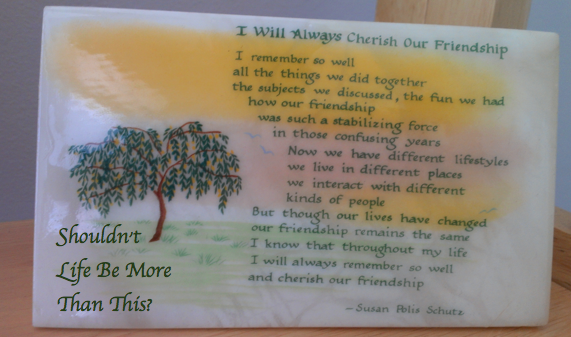 20. Fave photo you've ever taken - I don't really have a favorite photo that I have taken, but there is a picture on some sort of shiny stone that I have kept wherever I live for some time.  It is fabulous and represents how I feel about many of my close friends that I don't talk to nearly as much as I should.  But, I do still cherish the friendships.

More photos to come next week...

You can see the first week and second week photos, too.
Posted by a.eye