For June, I am doing a Photo-a-Day Challenge with Fat Mum Slim.

I've decided to post my photos each Wednesday of the week during June (unless something comes up and I don't have the week's photos ready, or can't upload them, or would rather write, or whatever else.)

Here are the first 6 photos for the month: 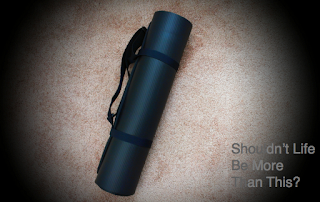 1. Morning - Each morning for a year, now, my mornings have been spotlighted by getting out of bed, putting on workout clothes, and doing yoga.  Fortunately, spring (and a new living location) has brought natural light to my mornings. 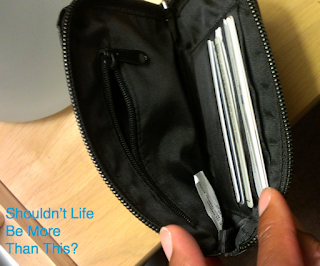 2. Empty - My wallet after this week's extravagant spending. 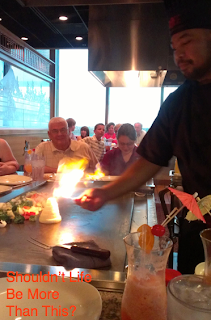 3. On Your Plate - Had an awesome Last Supper with Kid Sis #3 and Brother-from-another-mother-and-father to kick off his finishing his MBA, moving to Chi-Town, and getting an awesome job where he lives right across the street from his workplace.  I love Kobi Steakhouse - especially when they are lighting food on fire!! 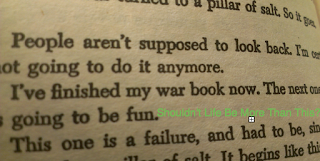 4. Close-Up - I am re-reading "Slaughter-House Five".  It is the first book I've read for pleasure in over a decade.  Not sure why I selected it, except that it was one of less than a handful of non-educational books on my small bookshelf - though actually it's not even mine, it's been borrowed and not returned.  I love this line about not looking back. 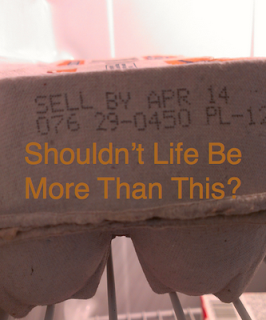 5. Sign.  This is clearly a sign that I need to get rid of the remaining three eggs in the carton.  Not even sure why I moved them into the new place since it was already the end of April when I moved and I hadn't touched the eggs in at least a month at that point. 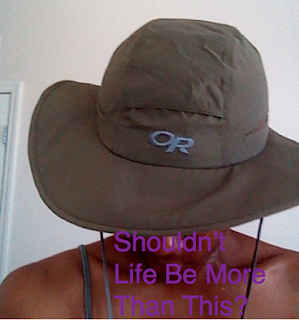 6. Hat.  This is the big hat I purchased for the track season.  It really helped protect me from the sun and had vents in the top so my head didn't get hot.  I had way less headaches this season than in previous ones.  I bought some super large, 70s sunglasses that I wore with the hat and always looked like I was going on a safari, though still felt cute and somehow got compliments.

More pictures from June to come next week...
Posted by a.eye

Email ThisBlogThis!Share to TwitterShare to FacebookShare to Pinterest
Labels: coaching, family time, impressiveness, its too early for all this, photo-a-day, reset my life, siblings