Aftermath of a young wedding

Many moons ago, Kid Sis #3 and Brother-from-another-mother-and-father were the flower girl and ring bearer for a family friend's wedding. 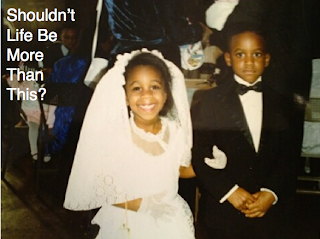 Pictures of them from this wedding always make me giggle.  Because they were both just so freaking cute, and due to the fact that she was about 3-4 years old and thought of this as her real wedding to her favorite boy.

You can see in the picture that her bliss was his trepidation, though.  Or perhaps, he was already perfecting that I'm-a-guy-I'm-too-cool-to-smile-I-must-look-hard thing that some guys do.

The other night as the three of us sat for our last dinner together as the "St.L Family" at Kobi Steakhouse, we did what we usually do.  We were laughing about random things, telling inside jokes, telling old stories, catching up on life, and trying to identify the NFL player that was sitting at the table to our right.  We slyly took a picture of him with my phone and then tried to go to the Raiders page and see if we could find a person that matched his size and look.

We didn't succeed at identifying him, but we did succeed in laughing so much that the people we were at the table with thought we must be there celebrating some sort of occasion.

He said so with such a straight face that I was a bit confused for a second.  "It's our wedding anniversary," he said as he was looking at his phone and pointing to Kid Sis #3.

The other family oohed and aahhhed at us and asked how long they had been married.  BFAMAF said that it had been about 20 years.  Still straight face.  Still looking at his phone.

I busted out laughing.

At that point, he turned the phone to the family and said, "We're African.  It was an arranged marriage."  The family gasped, but tried to look joyous and happy for the young couple.  Somehow, he had the above photo on his phone.  They smiled politely at the picture.

I almost choked on my fruity adult beverage as he said these things and continued in my laughing fit.

Fortunately, the dinner was full of good food and good times for us and the other family.

Unfortunately, we didn't get any free cake out of the deal.

Kid Sis #3 is still seeking alimony with about 20 years of back pay, especially now that BFAMAF now has his dream job in the Chi (working in a big management position for a company that means we can now no longer mention or show Coke products in his presence) and will be making money rather than hemorrhaging it since his MBA is finished.  If she can't get the money, she says she will settle for some free tickets to an NFL game since he is childhood friends with some players.
Posted by a.eye