Here is my third week of July set of photos.  I used the prompts from Fat Mama Slim's July Photo-a-Day Challenge. 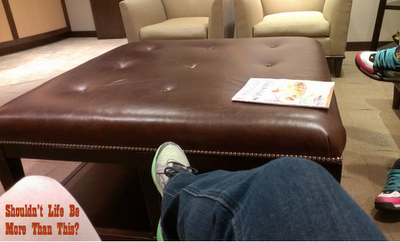 18. Plate - This is an amazing table that I would love to have in my home, if I had space enough and cool enough furniture to go with it.  I would love to just sit back and have people over to chill and use the table to place some plates and drinks and later behinds and feet on.  It is huge.  I hope I was able to put it into proportion with my leg and the regular-sized magazine on the edge there. 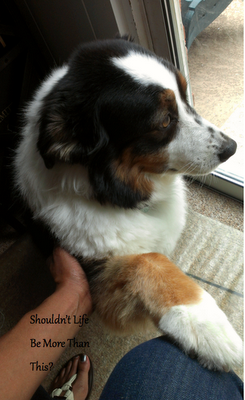 19. Animal/Insect/Pet - This is my dog.  Really it is my parents' dog, but I also claim her as mine, even though I don't live there and haven't lived there during any part of the dog's life.  She is awesome.  This Australian Shepard was first in her class during doggie training, but you might not be able to tell the way she runs toward you and wants to jump on you if she knows you and missed you in any way (even if she just saw you 30 minutes ago).  She has calmed down in her older age, but still loves to run around and show me she loves me each time she sees me.  That is love. 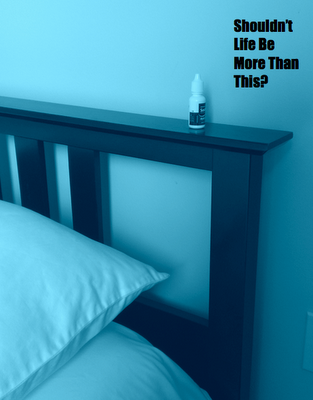 20. Eyes - I have gotten to the point where my Lasik surgery is starting to expire (it's supposed to, possibly, start getting worse after 5 years).  I am still 20/20, but I can tell my vision is starting to lessen.  I also have noticed that my eyes are getting dryer than usual.  I have started to sleep with eyedrops on the bed post so that I can put them in my eyes before bed and when I inevitably wake up in the middle of the night and my eyes are super dry. 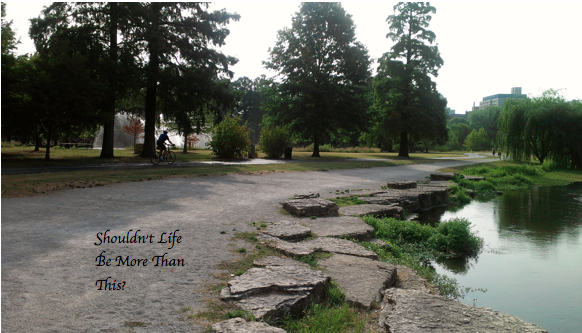 21. 9 o'clock - One of the beautiful parts of Forest Park (a park that is actually larger and cooler and contains more things to do - many free - than Central Park in NYC).  Behind the biker on the left side is a really awesome fountain that also has a waterfall on the back side of the pond.  I have started trying to run/walk each morning and this is one of the areas of the trail that I run/walk on.  On this day, it was fortunately not already in the upper 80s.  If I go any later than 8:30, it will be too hot in StL.   It was only in the mid 80s on this day. 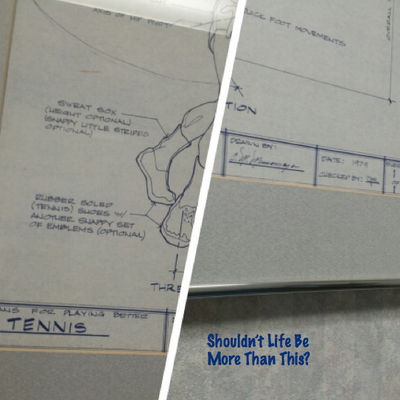 22. Upside down - While sprawled out on the table getting electrical stim treatment on my tendonitis-troubled elbow, I looked up and saw this picture.  I had to sit up to make sure I was reading it correctly since I was initially looking at it upside down.  It is dated as 1979 and on the left, you can see that it says that part of the plan for playing tennis is to have "sweat sox (height optional) (snappy little stripes optional)".  It also says that you should have "rubber soled (tennis) shoes with another snappy set of emblems (optional)".  I'm not sure if this is really from the 70s, but I find it hilarious.  On another wall is one for skiing and on another wall is one for weight lifting. 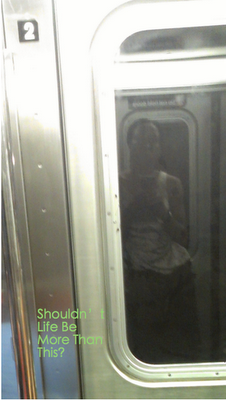 23. Mirror - My reflection as I stood on the 2 Train riding to Manhattan from Brooklyn.  Excuse my pore posture and the shine of my face, I was slouching from the heat and being tired and trying to make the lining of my skirt not stick to seemingly every part of my legs and rear.  My face felt like it was doing more than showing a healthy glow.  It was so hot outside and the AC of the train felt really nice. 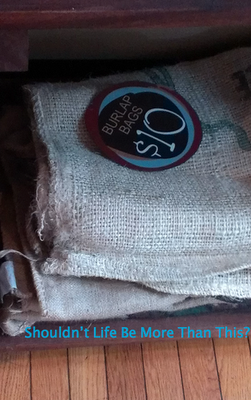 24. A stranger - I found this item for sale stranger than any of the other hipster items for sale in a little coffee shop in downtown St. Charles.  What exactly is one to do with a burlap sack?  Besides having a three-legged race.  And why is this type of bag better than any other type of bag that store could have sold in their establishment?

You can see images from weeks one and two, if you are interested.
Posted by a.eye

Email ThisBlogThis!Share to TwitterShare to FacebookShare to Pinterest
Labels: annoyances, art, beauty, comedy, family time, impressiveness, its too early for all this, photo-a-day, play, reset my life