I always find it interesting when I read a book and it becomes a film.  Sometimes the actors' portrayals of the characters is just like I imagined, sometimes it is a little off.

I have not read any of the Hunger Games books, but have heard that they are really good.

I was disturbed this morning when I heard that some fans who read the book and viewed the movie were completely disappointed (to put it nicely) that one of the characters is black in the movie.

They clearly must have skipped over the description of the character in the book as having dark skin.

Some of the Twitter comments are so disgusting and truly let people in to their inherently racist beliefs.
I know there are many people out there who think that good people are mostly white, that villains being black is the norm, that when a crime is committed in their society, it must have been a black or brown person committing the crime, etc.

Jezebel.com has an awesome post on this including some images and commentary on the tweets like the one I posted here: 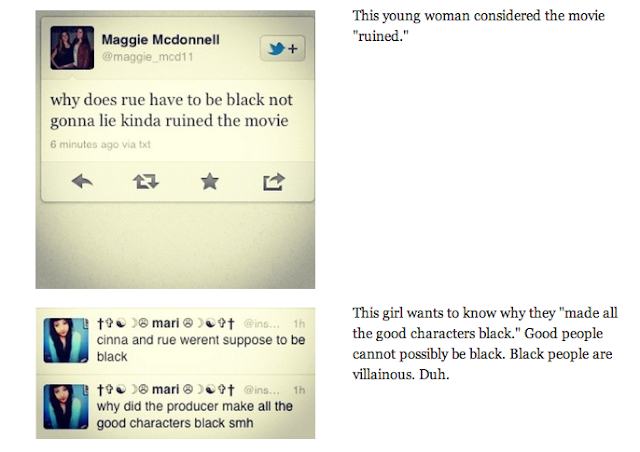 What happened to the "post-racial society" people touted?  Not that I ever believed that when it was spoken about.  We live in a society where race (though a human construct) is so ingrained even in our everyday actions and everyday prejudices.

Walk down the street one day or step in an elevator and watch some people's reactions to a larger, non-smiling black man walking by or walking into the elevator.  Turn on YouTube and watch videos of little girls talking about their hatred for the black girls at their high school.

Listen in your car when you pull up to a corner and there is a black person standing there and you can hear car doors lock.  (I remember the first time I heard that when I was out for a jog in college.  Some people seriously locked the doors when I got to the corner.  As though I was going to car jack them with my running shorts, sports bra, and my only weapon - a single key to my car!)

Post-racial is becoming more and more post racial.  As in post your racist comments or push forward some racist law or do some sort of racist action.
Posted by a.eye