LyzaDora the Artist is amazing in many ways

Yesterday, as I scanned through updates on FB, I came across one that really touched me in both a positive and a negative way at the same time. 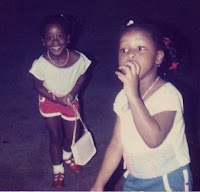 Not only do I have a brother-from-another-mother(and father), I also have two sisters-from-another-mister(and missus).  I love them to death.  I don't see or talk with them nearly as much as I think about them, but they hold a large place in my heart.  I have so many happy memories of them and even now, years after we have lived in the same city, when we get together again, there are joyous moments and inside jokes that abound and keep us laughing almost incessantly.

LyzaDora is such an amazing person.  From a young age, she was always making me laugh with her antics, stories, and just cool persona.

As she has gotten older, I have truly come to admire her for her academic success, her still being super cool, and especially for her career aspirations. 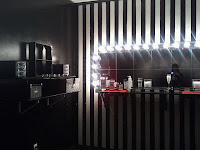 She has become such a successful make-up artist/hair stylist/wardrobe stylist that she has worked at major national events and worked on major celebrities.  She is working on her own studio and continues to grow and do bigger and better things.

She is stunning visually with and without makeup.

This is why I was saddened by the FB post from her sister yesterday.


Looking at my sister's accomplishments and in tears thinking of all the mean kids in elementary and especially middle school that bullied her because she looked different or wasn't as developed as they thought she should be. I wish they could see the Swan she has become. I wish 12 year old Lyzadora saw the 29 year old Lyzadora. I wish all the 12 year old "Lyzadora's" could see their 29 year old selves. I'm so proud of my sister.

It is so horrible that so many young girls who look different than what "the masses" deem beautiful go through periods of low self-image.

On Oprah's Oscar Special, Viola Davis said that she is just now feeling comfortable enough in her own skin to feel beautiful - that she was put down by so many people (even while in the biz) that she had low self-esteem about her appearance.  Her husband had to convince her to let her natural hair shine and not wear a wig to cover it in public.  Her husband had to convince her that she deserved to be treated well.

It is so awful that society can have this affect on people.

I have suffered this, too.  As a kid, I was called so many negative names that sometimes still pop into my head.  Even though some told me that I would be beautiful when I became older, that does not really mean much to an adolescent.

The FB post made me sad for these reasons.  Also because, I don't think that I personally have ever told LyzaDora to her face that she is among the most beautiful people I have had the visual pleasure of seeing.  Yes, I have liked some images on FB, and have commented positively about some pictures, but I have never told her so she can hear it with her own ears.  I never told her when she was young, either.

Seeing her grow inspires me to want to do more of this verbal uplifting and I have strived to do this with young girls I teach and coach.  I don't want them to think that their looks are everything, but I also want them to know that just because they don't look like "the masses" that people typically consider beautiful, there are a ton of people in other parts of the world who are considered beautiful that they share features with.  I know many may not believe me, but perhaps their older selves will look understand and become more confident and successful.

The post delighted me because she is truly a swan who continues to develop more and more into an even more wonderful woman in more than just her beauty.

I cannot wait until either I go down to Houston and see her in person again, or she comes up for her brother's graduation in May so that I can see her again.

I hope that at some point, if she hasn't done so yet, she will see the old bullies and naysayers and simply tell them, "Google me, baby!" so they can see all her accomplishments and all the great work and beauty she has shared with the world.

LyzaDora is more than a fabulous artist, she is an amazing, inspiring person who moves me (even from afar) with her compassion, her genius, her laughter, and her spirit.
Posted by a.eye