Maybe a fighting career is not for me

When I finished college track, I still looked for some sort of competition, some way to stay in shape and show off how great shape I was in.

For a while, I considered joining the St. Louis Slam (woman's football team).  They were really good and I knew the man who was the coach and loved his coaching ability and style.

That idea faded away.

Then I wanted to get into some sort of martial arts.  I looked at muay tai, kickboxing, mixed martial arts, and more.

That looked really promising.  And I have pretty pointy elbows that I just know could do some damage to the side of an opponents head.  I was in pretty good cardio shape and was really strong, so it was just a matter of learning the skills.

That along with being able to take a punch.  And a kick.  And be able to handle pain and still fight through it.

But, I'm a woman.  And I believe that the fact that we have ovaries (and all that comes with them) makes us able to stand a lot more pain than your typical man.

Even though I am in my thirties now, I still some times dance with the idea of fighting as a way to make a living.

This past weekend I watched a Strikeforce match between "Rowdy" Ronda Rousey and Miesha Tate.

Rousey was the challenger and Tate the reigning champion.  Prefight there was some trash talking and some getting in faces.

This made for some animosity prior to the fight and some predictable commentary.

The prefight stats come up and I see that the ladies are in some really good shape and comparable in size.  (Though much shorter than me and about the weight I was when I was in shape and competing in track.)

They throw punches like they really mean it and Rousey gets Tate in an arm bar.  Tate is able to some how get out of the arm bar (something I have seen few men do in similar fights).

The fight goes on.  The commentators mention that Rousey has never had a fight prior to this one that lasted more than one minute into the first round.

Later in the first round Rousey puts Tate into another arm bar.

Tate again tries to get out of it, but Rousey keeps at her arm.

But the reigning champion refuses to tap out of the fight and end it.  She keeps trying to turn out of the arm bar like she did earlier in the fight.

It takes a lot to  disturb my insides and make chills run through my arms. 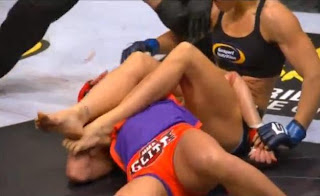 Rousey made all of this happen.

She had Tate in such an incredible arm bar (that Tate refused to submit to) that Tate's arm is bent in a way that is not even fathomable.  (I'm not sure the picture really does it justice.)

If you take your arm and hold it parallel to the ground and let the arm flop at your elbow so that it is at a 90 degree angle... that is how her arm was bent.

Only difference is that hers was bent backward.

I give it up for both women.  Rousey was unbelievable in her fighting, and Tate never gave up until her elbow was completely dislocated or broken.

If I ever needed something to convince me that maybe, just maybe, this sort of competition is not for me.  It was Tate's elbow.

I guess, I'll stick with my yoga and the occasional body weight exercises.
Posted by a.eye