My parents are Roosters

There have been tales of late about Tiger-moms who really push their children to achieve and to do better.

If I have to pick a title for my Nigerian-born parents, I guess it is going to be that they are Rooster-parents.

When I go to Nigeria, there is always the freshest of foods.  And I don’t mean Whole Foods fresh.  I mean that the pineapples are grown by my father, the oranges are grown in the yard, the goats are in your yard in the morning and on your plate in the evening (though not mine since I don’t like goat).  It is the same with the chickens.  I have never tasted chicken as good as the chicken I have had in Nigeria.  So fresh and so clean, clean.

The only annoying thing about the chickens and roosters is that they stay in your yard until you are ready to eat them or give them to a friend or family member as a gift.  The problem is not that they get in the way or that I trip over them.

When I was a kid and read children’s books with tales of farms and the different animals on those farms, they always said that chickens and roosters crowed at the crack of dawn.

Maybe these authors had never really lived on a farm or maybe the chickens and roosters in Nigeria had on night vision goggles and thought it was brighter than it actually was.

All I know is that their cock-a-doodle-dooing was a real problem for me many mornings as I tried to sleep.  They crowed way before the sun was even close to being near rising.

My parents are Rooster-parents for several reasons. 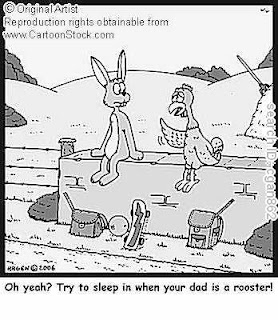 First, because when I lived in their house, my mother never let us sleep in on Saturdays or Sundays.  She either woke us up deliberately to start cleaning the house, or woke us up making phone calls to people.  I don’t know why it is that she can talk in a regular voice, even a soft voice when she wants to discipline us in public without people realizing it, but when she gets on the phone to someone in Nigeria, she talks as though she is yelling through one of those can-string-can phones that children concoct.  It wasn't even just mornings that she would awaken us.  There would be nights when we may have missed a dish or not cleaned the counter after doing dishes and she would wake us in the middle of the night to make us do it.

She and my father are Roosters together because the way they stay on their children reminds me of the peck-peck-pecking that chickens do when they walk and when they eat.  Throughout school they were consistent about checking on our grades.  They didn’t make sure that we were passing, because not passing was not an option.  Instead  there were checks to see how many As we had.  Even now as Kid Sis #3 is in graduate school she told my father that she had a B on a paper and my father thought she was joking and insisted that she really got an A on the paper.

I have a master’s degree in Education, but my father still insists that I need to go back to school and earn a PhD in something.  He always pulls us aside and tells us that because we have Nigerian names, brown skin, and are women, we need to work harder and be the best and have the highest degrees.  Although I sometimes have a little person in my other ear telling me other wise and to just relax, a mini-Dad is always in one of my ears telling me this.

Although they are Rooster-parents, they are very compassionate toward each other and toward other people.  The last time we went out to dinner for my brother-from-another-mother(and father’s) birthday, they were absolutely adorable.  Their were five of us eating and we were seated at a six person table.  The waitress set up one side so that there was an empty seat in between the two chairs.  My parents were on that side and in the middle of dinner, my mother took her plate, her drink and her silverware and moved over closer to my dad.  And they were sharing their food.  They always love going to parties and dancing together which is also cute.

Possibly aiding to their delayed retirement, they have helped numerous family members and friends financially throughout their working lives which in addition to the advice and sometimes the shoulder they have given and been for people adds to the level of respect they are shown by people they know.

They have opened their doors for college students who come to the region to study.  These people have been able to count on my mother for tupperware containers of food to stock their fridges, a place to go for holiday dinners, a local person who will attend their graduations, and a place to do laundry.  They are so generous to these students, that some of them call her their second mother.

These two people have instilled a lot in me that I don’t even realize all the time.  Some days I’ll just be in different situations and all of a sudden I’ll realize that I am doing something based on what they have told me or I’ll laugh at a story from one of the two, or I’ll flip the channels and see something interesting on CNN Headline News and remember the annoyances of how they will have that channel on for hours at time repeating the same stories every 15 minutes.  Every.  15.  Minutes.

They have made various sacrifices throughout their lives for their children and we appreciate them and what they have done and all that they have given to us.

So on this special leap day of February, I respectfully show a small part of my love and affection and appreciation for those two Rooster-parents who gave me life in so many ways.
Posted by a.eye