Despite the fact that she had some serious childhood issues...


... Despite these things Kid Sis #2 turned out to be an incredible person.  And I hope she realizes that I have nothing but love for her *as I channel Heavy D*.

I remember one trip to Nigeria when I was trying to be the good big sister and scolded her for going off to talk alone with a strange guy at a huge party.  Fortunately, she didn't listen to me, because that strange guy has turned out to be a great husband for her as the push through their seventh year of marriage.

She is such a strong woman.  She has not only dealt with the older sibling academic pressure as #3 did, but just like #3, she strived to do even better, winning awards, scholarships, and completing medical school.  While in med school, she even managed to give birth to my fabulous nephew.  He is definitely not shy with the cameras anymore.  She has managed to build her family in Houston and raise her son to respect his elders so much that he was upset when he found out his cousin was a month older than him... now he has to listen to what cousin Nik tells him to do.

She has shared fabulous stories of her medical exploits including smells that rival my students, stories of naming children wild names, and doctors who seem to be using derogatory terms (until she found out that it was just a Chinese saying).  Her stories make me laugh, worry, feel comforted, and sometimes bring me close to tears.

Kid Sis #2 is so supportive and giving.  I cannot think of anyone who could say anything bad about her.  She always has an open ear to listen to me complain, ask random medical questions, or just take a load off of my being.  She is so loving that she has let innumeral people stay (sometimes long term) in her home, even offering up her house for our family's Thanksgiving reunion.

She has recently gone through some rough times trying to have another child. 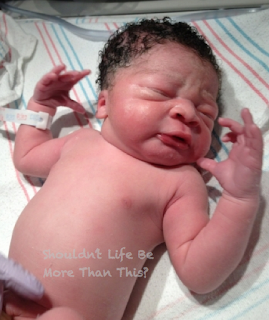 In addition to that, since November, she has been on modified bed rest with her current pregnancy - can't imagine doing that myself, though I would play a lot of WWF!  That lasted until mid January when she had to stay in the hospital for 3-4 weeks because they thought the baby (not due until Pi Day in March) was coming early.

This interrupted her medical residency time, but fortunately, the baby did not come too early and she used the hospital time to catch up on some studying.  Hopefully, will not have to redo this residency year.

I especially thank her today for giving birth to my second nephew last night.

He is a bit early, and I'm sure there may be struggles as he has to grow bigger, but she will continue to be a fabulous mother!!

Congrats, and keep being great!
Posted by a.eye