Since the theme of this month’s NaBloPoMo is “relative” I will take a few posts this month to talk about some of my relations. 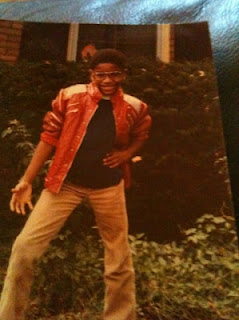 My brother is older than me by three years.  When I was younger, I absolutely adored him; I wanted to do everything he did and be around him as much as possible.  I wanted to wear his Michael Jackson jacket and gloves, but they were completely off limits to me.  I loved my bro anyway and admired his jacket each time he wore it.


I remember when I started elementary school, I was so upset that we would be going to separate schools.  I was going to be going to the local school that was a pilot program for incorporating computers into every classroom’s regular learning.  He was going to the regular school.


Despite our close ages, we never attended the same school at the same time.  For some reason, sometimes this makes me think we are further apart in age than we actually are.  He started school early as I did, but because schools became more strict with kindergarten age cut offs, I had to repeat that year.


Once I entered junior high, the teachers always knew of my brother and his greatness.  High school was even more so.  Every teacher who had had him or had seen him commented on his seeming perfection and I had to try to keep up their perception that our family was full of genius.  It was hard, but I think it motivated me more to try and do well in school.


Bro and I were never really best friends, but I always have found him to be a good person and a person who will laugh at some of my jokes and stories.  He also teaches me about technology.


This past Thanksgiving was the first in a while where all my siblings and parents were in the same place at the same time.


Afterward, Bro called me up and we talked.  Really talked about various things in our lives.


Honestly, it was the first time I have really opened up about some of those things with any of my siblings.  I guess, I feel like I don’t want them to see the real me, just the idea of me, not the broken pieces of me.


That talk was really great.  I felt a weight lifted off of me.


He apologized for not talking with me (and the other siblings) more like that, for not being more of a big brother.


He has been an excellent big bro - loves all of his sisters even though with each of the four births, I know he hoped for a little brother.


At the same time, it was nice to turn to him that night, and since, for life advice and to just let him know more of what was going on in my life.


I adored him as a young person, and still adore and admire him and all he has accomplished as an adult.  He really goes after what he wants and is a great leader who really cares about people.  And it is also really cool that he has been voluntarily car-less for years and utilizes public transportation and bike and car rentals in DC.


I still don’t talk with him daily, even weekly.  Sometimes it can be a month between our talks.


But each time, it is like no time has passed.  We fall into story telling, joke telling, money woes, relationship information, and just good times.


He is my big bro, and I always have and always will have nothing but love for him.
Posted by a.eye