Get that dirt off my shoulder

In my life I have come to realize that I get in my own way.  A lot.

Just this week, I made a plan to make sure that I was getting up in time for at least 20 minutes of stretching and getting my mind right for the day.  (I like to be thinking positively about what is to come because I believe that how I approach the day is how it is going to run - most of the time.)

There was not a single day this week where I woke up early enough to do this and leave for work at the normal time.

I had to rearrange some other things in order to get to work on time.  I kept my twists in a few days longer than they should have been in so that I wouldn't have to spend minutes doing my hair (don't fret, I still look decent), I took faster showers, I scarfed down breakfast faster, and I didn't fully catch up on WWF or HWF while eating like I like to do (I don't play during the day, so morning and after dinner are when I like to play mass amounts of games).  I also ended up having to deal with more traffic because I was leaving the house later.

I still managed to stretch, but it was mostly rushed, and I am aching because of it.

There are more examples of me getting in my own way just during this week.

I have not been drinking enough water during the day because I don't like to use public restrooms.  Blame it on The Discovery Channel and their germs (If you click the link, start at the 1:50m mark).  The school toilets have no lids, and that grosses me out completely.  My trying not to use public bathrooms is really nothing new.  My mother reminds me often that I used to go full days at school not using public facilities and that she really worried about what I would do when I went off to college and had to stay in the dorms. 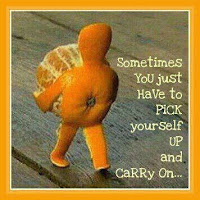 Since I am not drinking enough, my lips have been dry. I'm not quite like Dave Chappelle's character, but I am constantly having to put moisturizers on my lips when all I really need to do is drink more water during the day and not try to make up for it during the evening.

Instead of getting into my own way, I am going to consciously try and lift myself up.

I am going to take care of myself in more than just the physical sense.

I am going to be even better at thinking positively and taking action to fix things that don't work in my life that I want to be better.

I will brush that dirt off of my shoulders from the falls I have taken and I will move and take actions and I will be better than I was yesterday.

Each day.
Posted by a.eye

Email ThisBlogThis!Share to TwitterShare to FacebookShare to Pinterest
Labels: annoyances, its too early for all this, nablopomo, reset my life